I always thought the Ziggurat was the building, and the Zigursky was the name of the prison. Might be wrong. It's reffered to as both.

I've never seen it referred to as "the Ziggurat". Every dialog in which it's mentioned, it's "the Zig" or "Ziggursky Prison" or "Ziggursky Penitentiary". Where exactly is it called "Ziggurat"?? The neighbourhood in Brickstown where it's located is called "The Ziggurat". The building itself (which is the same thing as the prison) is not. I think the article title should be changed. Dark Horizon 14:29, 4 July 2009 (UTC)

I looked around to see if I could find any in-game/official references to it being called "Ziggurat" on the wiki. Here's what I found:

My impression (especially considering the last article) is that the real name is "Zigursky Maximum Security Penitentiary" or more commonly "Zigursky Penitentiary", but that "Zigarrut and "Zig" are nicknames. If you search for "Zigursky" and "Ziggursky" you find a lot more references than the few listed above. So I would support renaming it as well. -- Sekoia 20:44, 4 July 2009 (UTC)

So is "Zigursky Penitentiary" the likely new name with all the other nicknames set up as redirects? -- Blondeshell 23:28, 4 July 2009 (UTC)

One other piece of background info I found is from the original Prima guide:

The signature landmark of Brickstown is Ziggursky prison. This mammoth structure is most often called "The Ziggurat," and was constructed to hold prisoners with powers that would allow them to easily escape from normal jails. Other nicknames for the prison, used most often by those within its walls, include "The Brick House" and "The Big Zig." 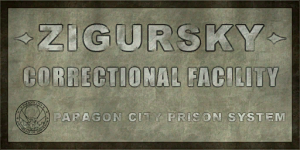 While cleaning up the links and redirects to this page, I saw that Template:InvSalvage_Enemy_Tech has "Zig" in the enemies list. Was there a specific named mob called that, or is it just an artifact from an inaccurate reference? -- Blondeshell 12:49, 5 July 2009 (UTC)