This article is about the contact Synapse. For the developer, see Synapse (Developer).

Synapse is a hero, one of the Surviving Eight, a Task Force organizer in Skyway City, and a member of the Freedom Phalanx. 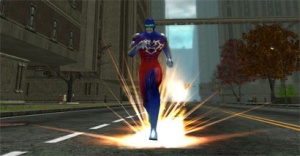 Steven Berry was just an average man, an accountant working for Crey Industries. While crunching numbers one day he realized that the company was funneling too much money into a project called The Disaster Relief Suit. Crey wasn't reporting all of the money it was using on the project to the government for taxes. His friend Ray Keyes, aka Positron, and a Dr. Rudy Bein were the leads on the project. Although Ray was oblivious to the discrepancy of the money, it was still an oddity nonetheless. So Steve did what any normal accountant would do, he asked questions. His superiors assured him it was just a mistake. Not content with their explanation Steve enlisted the help of his computer tech friend Diego Alvarez. Diego at first resisted to the idea to search the company files for the now lost data on the money. But with some prodding by Steve he gave in. Together they discovered the deleted data on a back-up floppy disk. Armed with more proof this time Steve marched back to his superiors. They thanked him for his help, and told him to thank Diego as well. That was odd to Steve, because he knew he didn't mention Diego's involvement in the search.

That night, while leaving work after putting in overtime writing up a full report on the incident, Steve was grabbed from behind with a cord around his neck and a gun put to his head. He was taken to a secret underground lab, Dr. Rudy Bein's secret lab. He was strapped to a table unable to move, and they also had kinapped Diego. Money wasn't the only problem for Crey's secret projects, they needed test subjects. And not many people were willing to sign up for DNA therapy or tissue alteration. Diego was killed right there on the spot by Bein with a needle to the neck, right in front of Steve's eyes. What they had in mind for Steve was more sinister and alot less merciful. They blasted him with high doses of electricity for days. While Bein was using Steve as a test subject, he was also interrogating him about Ray Keyes. Bein harbored a huge grudge against Steve's friend, simply because he couldn't measure up to him. The torture was unbearable for Steve. He couldn't take it anymore. But just when he was about to let Bein know anything he wanted, he let loose a huge burst of electrical energy blasting Bein across the room and shorting out all the equipment in the lab. Steve was free of his restraints and he fled. He stumbled his way into Ray's lab and collapsed in his arms. Bein and his thugs came crashing in the room guns blazing. Ray jumped inside the prototype Disaster Relief Suit and fended them off and escaped with Steve in his arms. Ray watched over his friend while he healed. All of the power coursing through Steve's body had amplified his electrical energy , giving him the ability to harness it into super speed and electrical blasts.

To this day, Crey executives deny any knowledge of the project in which Steve was an unwilling participant. He and Ray would eventually become Synapse and Positron.

His sidekick is Mynx. He is trying to help her become more disciplined and develop control of her powers.

Synapse first appeared in City of Heroes #1 from Top Cow.