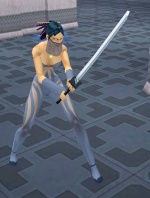 Villains can find her in Mayhem Missions, as an ally:

Heroes may face her in Safeguard Missions:

She can be encountered in many Alignment and Morality Missions:

Trained from birth to be the perfect killer, she has no name, no family and no compunctions about what she does.