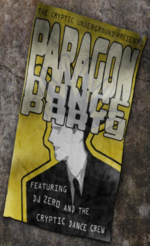 The Paragon Dance Party (PDP) was created in an early issue. Its release to the live servers was supposedly an accident but was kept due to fan request. The zone was replaced by Pocket D and no longer has any zone connections. However, the zone still exists and is only accessible to Red Names (and players manually teleported there), often used as a final judging place for official costume contests, so the finalists and judges are not interrupted.

This social zone was run by DJ Zero, who did not appear in game until Pocket D was created sometime between the release of City of Villains (Issue 6) and Issue 7. Though intended as a no-fire zone without enemy spawns, there was one instance when enemies appeared inside the zone. The day Issue 3 launched, Council and 5th Column troops battled in every zone in game, including spawning inside the Paragon Dance Party.

The warehouse "skin" used to created PDP is also still in game. It is used in the third mission given to Natural origin heroes who start in Atlas Park, "Speak with Detective Brogan about the Skulls' attack". With the revamp of Atlas Park in Issue 21 and the disabling of the old contacts, new characters do not have the chance to encounter this mission; only characters who had the mission in their mission list have access to it, effectively removing it from the game.