Vanessa DeVore is a Carnival of Shadows archvillain.

In July 2000, a pretty, young woman traveled to Italy from Paragon City. Vanessa DeVore was an Art History graduate student, studying in Florence. On a weekend trip to Venice, she found herself in a dusty, decrepit curio shop. She was drawn to a once beautiful wooden box, containing a chipped and discolored porcelain mask. Vanessa could see the latent beauty and potential in the piece, and eagerly bought it.

The mask, at first a minor curiosity, soon dominated her thoughts. She stayed in her hotel throughout the night, cleaning and repairing the mask. Finally, almost tentatively, she tried it on…

…Dawn broke fully into Giovanna’s mind. As the mask settled onto Vanessa’s face, Giovanna’s mind roared forth, nearly overwhelming the girl. The two sets of memories, emotions, and personalities drove Vanessa’s body into shock. The spirits wrestled all day and all night, fighting for dominance over the physical form. The conflict only ended the next day when a maid found her prone, and removed the mask.

Shaken, Vanessa packed the mask away and ended her European research. She returned home to Paragon City, ostensibly to finish her thesis. Instead, she spent all of her time researching the mask, and her distant relative, Giovanna Scaldi. Although tempted by the stories of her ancestor, Vanessa was too frightened to touch the mask again. Until the Rikti came.

Witness to the horror and devastation of the Rikti, and the fall of so many heroes, Vanessa felt she had no choice but to don the mask. Vanessa had an offer ready for Giovanna’s spirit – work together and share their resources or else both would die. United in purpose, Vanessa/Giovanna did her part against the Rikti. Although she could not mentally dominate the aliens directly, she created an army of perfectly-coordinated, fearless soldiers under her mental halo. She fought until near collapse, and then in a moment of desperation “pulled” too hard on a subject’s soul … and consumed it in a flash of hunger. Although horrified by what she had done, the rush exhilarated her and recharged her. As long as she had souls to sustain her, she could fight indefinitely. Vanessa/Giovanna devoted her forces to the Alpha Strike team. When the Rikti portal was destroyed, all of her puppets were killed. Cut off from her resources, she collapsed.

When Vanessa awoke, free of the mask, she longed for Giovanna like a lost love. Vanessa reclaimed the mask immediately. United now in shared history and close friendship, Giovanna convinced Vanessa that she needed a reward for her good service. Giovanna helped Vanessa build her own little version of Paradise by seducing and dominating the young and wealthy of Paragon City. She reveled in the luxury, but soon felt directionless.

Vanessa and Giovanna agreed upon a new purpose. Vanessa would create a haven of safety for herself and her closest subjects, keeping them safe in this dangerous city, and woe to any who crossed them. She knew she could not always be on guard, and so she chose her ten favorite subjects, all young and beautiful women, and shared with them the vision of Rachel’s death. They were horrified and incensed, and vowed to do whatever it took to help Vanessa in her goals, exactly as she had planned. The Carnival of Shadows was born.

Empowered by Vanessa’s telepathic insight and their own outrage, the women were transformed into psychic street fighters, able to pull knowledge from their foes’ minds to counter any attack. Emboldened by this first success, Vanessa and Giovanna began cherry picking recruits in earnest, empowering them into a super-powered strike force. 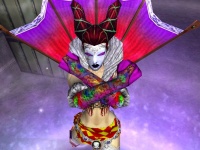 The Carnival of Shadows exists principally to cater to the needs and desires of Vanessa DeVore and the spirit of Duchess Giovanna Scaldi. In return, Vanessa has built a decadent and insulated environment for her subjects, in which they may enjoy whatever pleasures they desire. All she asks in return is their absolute loyalty in the ongoing battle against her many enemies. Of course, since Vanessa dances through the minds of each and every one of her followers, they are always happy to do whatever it is she asks of them.

However, to keep her energy levels high, Vanessa needs a constant stream of souls. If her powers fail, the whole enterprise will tumble like a house of cards. Her servants consist of beautiful, wealthy, young socialites, but only the most attractive, charming, and talented women are ever considered worthy of attaining the highest ranks. From the highest Ring Mistresses to the lowest Attendants, all are focused upon keeping Vanessa DeVore happy – for by sating her constant appetite, the Carnival of Shadows continues to spread its influence.

Vanessa DeVore is many things to many people: sly trickster, peppy party girl, cold-hearted killer. For years she's been wearing the delicate porcelain mask that contains the soul of the powerful psychic, Giovanna Scaldi. Even with Giovanna vastly weakened by her defeat on the psychic plane, Vanessa is as strong, and as evil, as ever. She has made Giovanna's power her own, and in doing so, she has destroyed the innocent woman she once was.

During the mission Take the mental monocle back to the streets:

Before combat: It seems Giovanna's powers are no longer necessary. I am truly the Carnival's queen now!
Combat start: You may have defeated Giovanna, but you shall never defeat me!
Defeated: No! I am forever!