At midnight Eastern for east coast servers and at midnight Pacific for west coast servers on Wednesday, February 8, 2006, a special Valentines Day Event 2006 began. Heroes and villains were awarded badges, special missions were made available, and extra costume parts were added. The event ended February 22.

For the first time ever, heroes and villains could team up on missions. In fact, to complete missions from your enemies contact (Ganymede for villains and Scratch for heroes), it was required to team up with your enemy, at least temporarily. 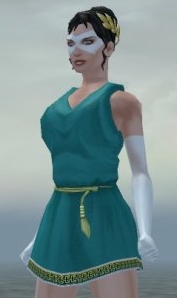 Every hero or villain who logged in beginning at the start of the event also received a new Toga costume part. The Toga is accessible under the Upper Body Unique Tops selection. It is selectable under the Tops section and listed as Patrician Toga.

In addition, any hero or villain who referred another player to City of Villains using their Valentine's Day Trial Code received two more costume options, a Victory Laurel and Hellenic Sandals, as costume parts if that player activated his or her account before the end of the event deadline. (See next section for more details.)

NCsoft also used the Valentine's Day Event 2006 as a marketing opportunity by offering a free 14-day trial serial code to City of Villains for all players. Players received these trial serial codes via e-mail or could request one at the official City of Villains web site. Once a player received a free trial code, he or she could forward it to a friend to try the game out for free. The trial codes were good until February 22, 2006, at 11:59 pm EST (8:59 pm PST).

If a player's referral activated his or trial account before March 12, 2006, at 11:59 pm EST (8:59 pm PST), both the referring player and the referral received two additional costume options, a Victory Laurel and Hellenic Sandals. The Victory Laurel is an option under Hair for the Standard, Masks with Hair, and Pointy Ears Head types. The Hellenic Sandals is a Lower Body option as a type of Boots.

The new store contacts, Chilly and Dram, sold special new temporary powers called Dimension Drop powers. These powers would increase your teammate's damage, defense, or buff their hit points and endurance, but if used on one's traditional enemy (heroes on villains or villains on heroes), the power had a significantly greater effect. Chilly sold these temporary powers to heroes, and Dram to villains.

Earning Handsome or Beautiful (see below) would unlock DJ Zero as a contact, who would assign a mission to defeat a special named Red Cap Elite Boss, Snaptooth. Successfully defeating Snaptooth five times earned a hero or villain the Toothbreaker Badge, a special achievement badge for this event.

Heroes logging in during the event received the Heart of Light Badge.

Villains logging in during the event received the Heart of Darkness Badge.