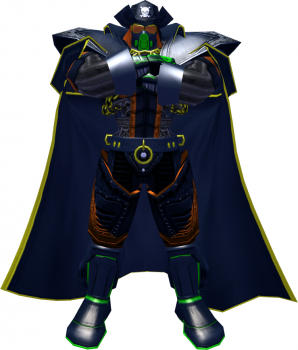 There are various epic threads throughout the history of humanity that have brought into this world elite classes of trusted professions; states of existence that stand above all others in superiority. Some sail the high seas and plunder the booty towed by the unsuspecting traveler. Others partake in the study and discipline of ancient arts to covertly eliminate their enemies with unmatched physical prowess. Still others focus their efforts into intelligent machines capable of making precise decisions and processing enormous amounts of data. The collective essence of awesomeness that emanates from these trades was gathered and forged into a mighty and fearsome warrior who is known and revered by those whose practices he makes his own. This is the legend of Yarrshiro X, the Robot Ninja Pirate.

The warrior makes his rounds with great stealth and great strength, and destroys his foes with his trusty blade Perry. It is not known who created Yarrshiro X or why, but whoever it is has given him a tap into the power of the very essence of awesomeness from which he was formed. Yarrshiro X is equipped with a component of unknown efficacy, the Majesty Capacitor, which can be charged with incredible levels of awesomeness. It is difficult to strike a target so awesome, first and foremost, and with enough concentration of the essence, he will become too awesome to be seen with the naked eye. The Majesty Capacitor can be overloaded as well, ultimately making its wielder nearly impossible to behold or attack.

The One I Didn't Want

Something about Stalker didn't sound right to me. Part of it was knowing just how fragile Archetypes can be, even with dedicated defenses, and the thought of giving a melee-centric class as few hit points as Stalker had "repeated faceplant" written all over it. The Stalker deals out tremendous damage, sure, but at what cost? The repeated revocation of powers like Quick Recovery suggest that maybe Stalkers are supposed to be in-and-out fighters and not stick around for very long once engaged in combat. That all sounds well and good in theory, but the City of Heroes game as a whole simply isn't designed for that kind of gameplay. I really wasn't looking forward to the Archetype, and put it off as long as I did in favor of things that sounded a better fit for the game mechanics.

In order to compensate for the expected suckiness of the Archetype, I took the initiative to create the most awesome character imaginable: a robot ninja pirate, from space, wielding a laser sword. The alternate zombie demon cowboy costume didn't turn out as well. And there's regrettably no source of dinosaurs in any of this.

Since Stalkers kinda rely on being hidden for double damage, and cannot be interrupted lest their Assassin's Strike fails, I didn't figure that a Resistance-based secondary would help me out all that much. This left me with Defense-based sets: Super Reflexes, Energy Aura or Ninjitsu. Having experienced Energy Aura on a Brute already, and becoming well familiar first-hand with the terrible disadvantages of having only Defense as a source of protection, I had to rule it and Super Reflexes out of the picture entirely. This left me with only Ninjitsu, which had a self heal and an area-effect placate for when the going got rough.

A good call, and fortunately, it wound up as a rather fun and effective character. One that I like playing, even. A lot. The enormous damage output is a tasty departure from my previous experiences with the other melee Archetypes, and the Defense (with the emergency toys in Ninjitsu) make it last long enough to get an attack in edgewise. It may be fragile, but with the volatile forms of protection at its disposal, the character turned out orders of magnitude (of magnitude) better than I'd hoped. And come on: rocket boots!

Broad Sword and Katana/Ninja Blade are twins, essentially. The former has higher damage and longer recharge, meaning heavy-hitting, slow attacks. The latter is just the opposite. Since Stalkers do that spike damage thing anyway, Broad Sword seemed the natural choice. Higher damage per individual activation means critical damage is more effective. But more than that, the Arabian Scimitar closely resembles a cutlass, which is a pirate-like weapon to have. Gotta focus on what's important, after all.

Broad Sword's not just slow and heavy-hitting; it's very heavy-hitting, even if it's just Lethal damage. It fits in with the Assassination mechanics very well, and frankly, I think I lucked out by selecting it as the primary powerset. The Melee Defense buff from Parry is very welcome, and enables me to maintain a healthy Soft Cap to all positions at all times (see above section on survivability). All-in-all, I'm writing this one off as a success.

I took Shuriken too, 'cause, you know... ninja.