This user is a super stud. You can help the Paragon Wiki by not making sneaky edits to his user page.

I've been playing CoH since Issue 1, and CoV since beta. The first I heard about this game was on Something Awful, of all places. After reading the epic saga of the Tiny Cowboy I was hooked.

I don't actually read a lot of comics, but I like the idea of comics, if that makes sense. I never got into buying and collecting them, though I do own a few graphic novels (Watchmen, Return of Superman, Akira). My favorite cartoons growing up were Ninja Turtles and Batman.

This is me getting pummeled by Miss Kitty. 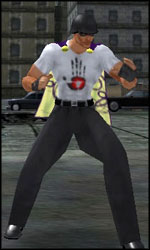 My main, my 50, my man. Dark/Regen scrapper. He's a badge hunter, with over 400 right now. Workin' on the Flashback badges.

Juan Gris and his brother Paco were in a terrible industrial accident caused by a few careless criminals. Paco was killed and Juan gained the power to channel dark radiation through his body. After mourning his brother and learning to control his powers, Juan vowed to use his powers to protect others from his brother's tragic fate.

As Grey Dog, Juan wears an old GI helmet, a beachtowel-turned cape, and the shirt he wore on the day of the accident, blood-stained where Paco touched him as he took his dying breath. 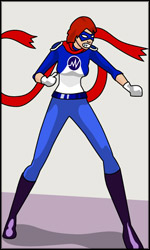 A chimp with a magic cape and a heart of gold.