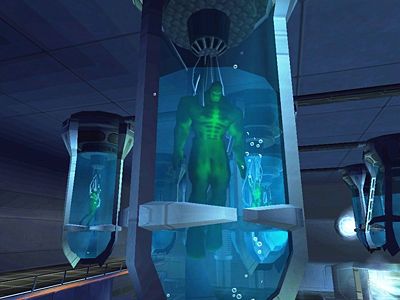 No one seems to know when the Revenant Hero Project, also known as the Heroes For Tomorrow Program, started, who did it, or why, though the goal seems to be obvious: create a private force of metahumans under the control of Crey Biotech. The final result of this project is the uniformed, helmet-clad metahumans known as Paragon Protectors. First seen publicly during the Rikti War (8), the Paragon Protectors are officialy one of the many supergroups present in Paragon City, sponsored by the Countess Crey, (3) but not officially linked to her or the corporation in any way. (4 & 7) The group is actually the superpowered arm of Crey, shock troops Crey uses to deal with any metahuman threats they find in their way. 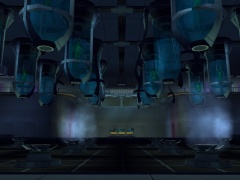 The process to create these superpowered warriors seems to be long and complex, but can be resumed in two stages:

The first is the obtention of genetic samples to create clones with. Crey sends their operatives and field agents to obtain DNA from metahumans, both alive and dead, or even to kidnap them. (1 & 2) It is rumored that Crey stole the corpses of many dead heroes who fell during the war. They could have as many as a hundred of corpses if rumors are true. (8) This seems to have been the destiny of heroes like Invisible Falcon or The Shining Light, who are probably still trapped in some secret Crey laboratory, perhaps still alive ...or not.

Once they have obtained the DNA, the Crey scientists proceed to create a clone and accelerate its growth somehow, via a process that has never been explained. (2)

This creates a perfect copy of the original target, owned by the Crey Corporation. Unfortunately for them, they discovered long ago that this step only wouldn't be enough: the new individuals, though physically perfect copies of the original metahumans, lacked the experience and control over the powers of their original, having little to no control over them: while their bodies were developing, their minds were not.

The second phase would be the Project Locke: In order to give their new synthetic soldiers full control over their powers, Crey needed some method of advanced learning. This is when Project Locke came into play. This method allows to insert a module of DNA in a full grown clone, thus the template body gaining the benefits of all the info contained in the inserted DNA. This way the clones may now gain full control over their bodies' powers. Apparently, Crey also removes any ethics and morals from the DNA inserted somehow to avoid future complications. (1)

Project Locke is under the direction of Dr. Paul Summerfield, who based it on the work of his former boss, Dr. Carole Friedken. Carole Friedken, an elderly female scientist who vanished without a trace and whose corpse was found in the sewers five months later, had developed a process named 'Memory Downloading Process', though she never had the chance to patent it.(5) This process is suspiciously similar to the 'Crey Memory Transference Device'.(1 & 5)

Once the metahuman body has been developed and the information desired has been genetically introducted, the new metahuman is ready to serve Crey. An interesting fact is that these synthetic beings have some sort of flaw -or mark, if you prefer- in their souls. (3)

The Revenant Hero Project is currently on its ninth generation, field testing phase. (1) There are no data about the previous generations other than a handful of Protectors from the Seventh Generation, apparently similar in power levels to those of the Ninth. The Protectors deployed by Crey in the corporation's facility located in Grandville in the Rogue Isles tend to be more dangerous than the ones deployed in Paragon City in zones like Eden or Brickstown, probably due to the dangerous, aggressive nature of the place.

The next generation: Paragon Protector Elite

The width and degree of the powers used by the current Paragon Protectors suggests that we may have not seen yet the project developed to its full potential yet. After all, a Protector can be as powerful as the being from which he was cloned.

The Paragon Protectors Elite seem to be an improvement over the "regular" ninth generation ones, or perhaps are simply ninth generation ones with enough experience in the field to be considered veterans. Whatever the cause, there is no doubt that these new Protectors are a true threat to any metahuman unlucky enough to find them.

Apparently, they haven't any leaders or notable characters among them... yet.

The future of this project and its implications are also intriging: One of the most distubing findings of Portal Corp was dimension Sigma Psi 20-7 , where a group of Paragon Protectors seem to have developed a hive mind and taken over the Crey labs there (9). It is unknown if the rest of the world has fallen to them or if they are sealed off in that lab or the like, but an army of metahumans with telepathic communication is likely something very hard to stop.