Reichsman is an Archvillain from an alternate earth where Nazi Germany won World War II. From there, he led the Amerika Korps in an attempted invasion of Paragon City.

Heroes can face him:

Villains can find him: 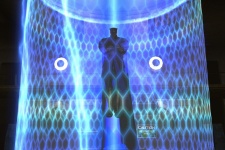 The Reichsman, an alternate version of Statesman, led the Amerika Korps, an elite super powered hero organization that helped preserve Nazi rule over the former United States in a dimension explored by Brian Webb. Intrigued by these other-worldly interlopers, The Reichsman captured Dr. Webb and his explorers, tortured them to death, and ended up extracting a great deal of data about Webb's home dimension. Data is all well and good, but the Reichsman decided he wanted to see for himself, and so he led Amerika Korps through the portal and back to Paragon City.

It didn't take long for the super-powered fascists to earn the attention of the Freedom Phalanx. Queen Comet, a prominent member of the Phalanx and friend of Dr. Webb, saw the alternate Statesman come through and, having been briefed by Portal Corp about the world Webb and his escorts were exploring, she quickly called for back-up and bravely fought off the invaders until helped arrived. Although seriously wounded, she managed to hold on until the Statesman and the rest of the Phalanx arrived.

The ensuing battle raged through the Portal Corp laboratories and spilled out into the city streets. The Reichsman was every bit the equal of his all-American counterpart, and the two nearly beat each other into the ground. Fortunately, the rest of the Amerika Korps did not measure up to the Freedom Phalanx. With his henchmen defeated, it was only a matter of time before the evil Statesman fell. To this day he remains frozen in suspended animation within the Freedom Phalanx's main headquarters. This means that he is buried under the war-torn area of Boomtown.

This Marcus Cole, from an alternate dimension, was a rogue and a mercenary who was exposed to mustard gas during World War I. In search of a cure for the effects of the gas, Marcus discovered the Well of the Furies. He drank from the well and was granted incredible powers. Adopting the persona of Reichsman, Marcus used these powers in the service of the Axis powers on his world, leading them to victory over their foes. When he discovered the existence of another Earth, he traveled there and was defeated and imprisoned by the Freedom Phalanx. Now he's back, and ready for revenge.

During the Barracuda Strike Force, a group of villains will be fooled into freeing him:

Foil the 5th Column in Boomtown during the Barracuda Strike Force, Absolutely Invincible

On spawn: I am unstoppable!
Combat start: Your interference is foolish, Character. Since you were instrumental in arranging my release, I offer you a choice. Leave now, or stay and suffer my wrath!
After defeating a player: needs data

Go talk to Recluse during the Barracuda Strike Force

Stop the 5th Column during the Dr. Kahn Task Force, Enhaced and Unstoppable

"Ah, Character, you cannot imagine how good this feels."
"You can pit your puny powers against me, but it will do you no good."

"I was better than anyone before, and now I've been enhanced... supercharged."
"Do what you will; you can't touch me. No one can. I'm unstoppable!"

Defeats a player: "Your failure is inevitable, Character. You cannot even hurt me while I... I can certainly hurt you."

Go face Reichsman in his base during the Dr. Kahn Task Force

Countess Crey: "Tell me what's in it for me."
Nemesis: "Your plan seems flawed, Reichsman."
Gyrfalcon: Why would you think the Malta Group would throw its resources in with your bunch of fascists, Herr Reichsman? It is a good thing I'm restrained by this bubble, or I'd show you exactly what we do with your type.
Vanessa Devore: "Your plan seems a good one. But why should you be the one in charge?"
Reichsman: "Already no one can stand before me. With the addition of your organizations, we will rule this place...under my guidance, of course."
Reichsman: "You must see the benefits of making common cause with me."
Reichsman: "So I offer you this: Join me or stand aside."
Reichsman: "So I tell you this: Join me or perish."
Vanessa Devore: "Your amuse me, Reichsman. You in charge of everything? Ha."
Nemesis: "I need not fear you, Reichsman. Your plan seems flawed, while my planning remains unparalelled."
Countess Crey: "You are mistaken if you think we have common cause, Reichsman. You are wasting your time!."

Reichsman: "Once again, you heroes seek to thwart me. And once again, I shall send you running back to your mothers like little children scared of the dark!"

Reichsman: "Vas? What is happening? How did you get so powerful?"

Reichsman: Gyrfalcon, come aid me!
Gyrfalcon: Hero intervention! You can't control your own base. I'll do what I have to to save my own skin, but don't come near me after this, Reichsman.

Reichsman: "What have you done to me? Countess, assist me with these heroes!"
Countess Crey: "Heroes here? Stop them!"

Reichsman: "I cannot fail! You will not stop me! Nemesis, to me!"
Nemesis: "I was prepared for this!"

Reichsman: "Together, we cannot fall. That is the point of this potential alliance, Vanessa Devore."
Reichsman: "Aid me now and my forces will aid you in the future."
Vanessa Devore: "Even here, these heroes interfere. They shall learn the folly of their actions."

Reichsman: "I will not accept this!"
Reichsman: "You may have triumphed today, Character, but I will return!"

Fist of Tyranny is a PBAoE smash attack which is similiar to Statesman's Hammer of Justice attack, but with Knockdown instead of Knockback, Smashing/Negative Energy Damage, and foe Stun, -Recovery and -Endurance. Corrupted Lightning Bolt is a large energy PBAoE with a short timer. Unlike Statesman's Zeus' Lightning Bolt, Reichsman appears to be able to use it regardless of his current hit points.

With Reichsman's Resistance and combining Unstoppable values, Reichsman will be immune to Smashing, Lethal, Fire, Cold, Energy damage, along with 90% resists to Negative Energy and Toxic damage. Defeating Reichsman may prove problematic if there are no debuffers on the team.

Finally, Reichsman's hit points are apparently ten times the amount normal Archvillains get, in the 200,000+ range. Heroes and Villains may need to prepare themselves for a long fight.