This article is about the Signature Story Arc. For other uses, see Pandora's Box.

This information contains features that were to be implemented in Issue 24 and was current as of the game's shut down date.

Pandora's Box is the second Signature Story Arc released in game. Both Heroes and Villains are being supercharged with new uncontrollable powers. Heroes team up with the remnants of the Freedom Phalanx to discover the secret menace behind the chaos, while Villains lay the groundwork for a new organization to rival the power of Arachnos.

Each part of Pandora's Box, called an "episode," is available for purchase on the Paragon Market for 400 Paragon Points; each episode must be purchased separately. VIP Players also have Signature Story Arcs available to play for free as long as they keep a subscription; dropping to premium requires purchase to continue playing. 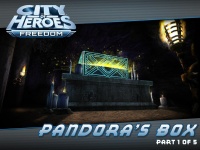 Reeling from the deaths of Statesman and Sister Psyche, the Freedom Phalanx is undergoing a period of recovery. Meanwhile, random heroes and villains are developing excess powers and its up to players to track down the cause. 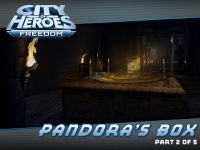 The search for Pandora’s Box is underway. Every faction in Paragon City and the Rogue Isles vies to track down the legendary artifact. Heroes and villains will seek help from the gods, fight off rivals, and even travel through time to find the relic. 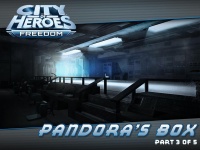 It's a race for absolute power, and only one side can win. Can you reach the box before the competition and what will happen if Pandora's Box is opened? 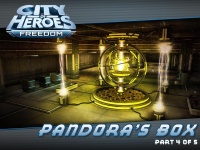 Pandora’s Box is open, and chaos reigns. Doctor Harvan may have a way to contain the vast, unchecked energies that have been released, but every answer he provides only raises more questions... 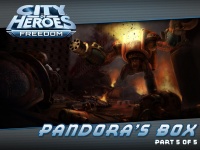 The struggle for the power contained in Pandora’s Box finally comes to a head. Will you be able to overcome an ancient power that once fueled the gods? Or will you be trampled underfoot, another casualty in a bid for global conquest?

Only released on the beta server before shutdown, but not on the live servers.