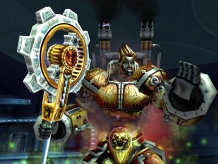 Nemesis is an Archvillain and the leader of the Nemesis faction.

Heroes can find him:

Villains can find him:

Nemesis has had over 100 years to perfect his armor and his combat skills. He is a formidable, and wily, opponent.

Nemesis had been hiding in the United States for decades. Thanks to years of patient plotting, he secretly controlled much of America's arms and war material manufacturing capability. Through his agents and minions, he had access to not only the latest military equipment, but also to vast sums of money that he used to build his own secret army. While America slept off its hangover after celebrating VE Day, Nemesis played his hand.

In the predawn hours after the celebration, Nemesis assembled his silent horde of fanatic robotic followers within striking distance of Washington, D.C. As the sun rose over the Capitol Dome, it brought flights of jet powered strike bots, the arcs of rocket-rifle fire, and devastating atom ray blasts. Nemesis and his clockwork troops quickly overran military and super powered protectors alike. President Truman only escaped thanks to a well-placed hero with teleportation powers. Nemesis now held most of Congress and the entire Supreme Court hostage. He staged an elaborate ceremony on the Capitol steps, and forced the Chief Justice to swear him in as Emperor of the Americas.

Heroes came flooding back from across the Atlantic to face this unanticipated threat. By the time the first heroes arrived, led by Statesman and the Freedom Phalanx, they found the situation even more dire than they could have imagined. Nemesis had hidden nerve gas bombs throughout the twenty largest cities in America. With the touch of a button he released the deadly toxin, ensuring a painful death to tens of millions if they did not receive the antidote within 24 hours.

What followed was the most desperate hour America's heroes had ever known. World famous champions of freedom fought deadly robots and atomic armored shock troops in the streets of our nation's capital. Finally, the heroes faced down the evil genius himself on the steps of the Capital building. Nemesis was ready for them, unleashing his atom-ray upon the assemblage, instantly killing dozens of heroes. However, in the chaos, Sister Psyche managed to use her telepathic powers to pick the location of the antidote from Nemesis' mind. The rest of the heroes fell back before the metal clad monster's onslaught.

Wounded but still mobile, Sister Psyche escaped the scene of the carnage and got word out to the Army. Within hours, Dr. Mnemonic had synthesized an airborne version, and the air force and flying heroes were spreading it across the infected cities. Nemesis' poison was neutralized, and Washington surrounded. Hundreds of heroes converged on the capitol and joined together for a second march on Washington. They fought through the remainder of Nemesis' forces and thought they had defeated the evil genius himself, only to find that all they had captured was a robot duplicate. Nemesis had escaped once again.

Although Nemesis lost, he had done great damage and, more significantly, ushered in a new era for super powered villains the world over and in Paragon City particularly.

Still stinging from his defeat all those years ago, Nemesis plots in the shadows, waiting once again for the perfect opportunity to bring the world under his heel.

In the Help with Conference Security mission from Serpent Drummer, Lady Grey's interaction with the Fake Nemesis indicates that they have met before.

The Dark Watcher's story arc reveals Nemesis, along with his ally the Rikti warlord Hro'Dtohz, to be the catalyst behind the Rikti invasion of Earth.

When talking to Mender Ramiel after completing his arc he will confirm that Mender Silos has used the alias Lord Nemesis in the past. However, Silos is millenia removed from Nemesis:

It's all a Nemesis Plot

Nemesis is well known for his diabolical scheming and nefarious plots. So much so, that some contacts and heroes theorize that he is behind every major event in Paragon City for the last several years. Although this is likely not the case, Nemesis has connections with nearly every major villain group, and uses front companies for front companies, never revealing his true intentions.

The prevalence of Nemesis's plots led to joking speculation on the game's forums that any major announcement was a Nemesis plot. Nemesis plots were also referenced on the loading screen tips; one read "Not everything is a Nemesis plot," while another contrarily stated "It's all a Nemesis plot."

The Web of Arachnos

Nemesis can be found in The Web of Arachnos book by Robert Weinberg. In the book, Nemesis' original name is given as Gerhardt Eisenstadt.