Mission:Tip - A Long Line of Spirits

Villain aspect completed. Need data on Rogue side of things.

You notice something odd out of the corner of your eye...you turn and see a line of...spirits...seeming to be waiting for something to open within a nearby wall. You walk over and pull the last spirit in line away to question it regarding what is going on.

L-leave me alone! We're going to see the show! H-haven't you heard? That Bocor, from Port Oakes, he's finally going to be going through with the ritual!

He finally got what he wanted from that Olivia Starr - her soul is now ready to be used! We all are anxious for the time to come. We...don't know what exactly will happen, but we do know we'll be able to travel to the other side! We can hear Starr's pleading, that she'll tell anyone who rescues her how to access her bank account to take all her money - but it's too late now for her!

You toss the spirit back into the line and step back, pondering over the situation. Mr. Bocor is a large player in Port Oakes, and his access to the realm of magic is vast and deep. Just what exactly he's using Olivia Starr for is not known...but perhaps...you could find out what Bocor intends to do...and instead use her soul for yourself. If Bocor has a problem with it...well...he can take it up with you, if he dares.

On the other hand, Bocor is a dangerous man, and Olivia Starr is known for her wealth. If you were to somehow save her from this plight, you would be rolling in the money. It might mean angering Bocor, but you can pay him off if he tries to make any moves.

You track down the source of the ritual to a Circle of Thorns lair in the caverns beneath Cap au Diable. You use your contacts to discover why exactly Mr. Bocor was interested in Olivia Starr in the first place - her soul had been marked as a doorway between planes.

When this ritual is complete, a doorway will be temporarily unlocked to a plane called the 'Ether Plane', where it is said that great power and knowledge sit, waiting for someone to come and take it. That someone is going to be you - if you get to the portal first.

You call in some favors from contacts and others that you know within the Isles - they'll keep Bocor busy while you're looting this plane for everything that it has. If Bocor does show up in the end, you'll be sure to show him just how you feel about others getting in your way. 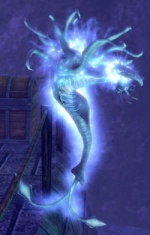 Guardian of the Ether

You've got to hurry to the planar portal before Bocor gets there. Time is of the essence.

You've defeated the minions within the plane, though you have to wonder how much this was worth, exactly

This creature seems to be one of the guardians of the Ether Plane, and is set on ensuring that YOU don't make it out!
You will die on this plane!

You step out from the Ether Plane with less than what you thought you would get. You'll have to look into the reason why Mr. Bocor would go through all this trouble just for a piece of paper with a name on it - perhaps finding out the reason will lead to something useful.

Normally you wouldn't be too concerned about the predicament of Olivia Starr - but the fact that she's throwing a very large amount of money to anyone who is willing to help her out does go a long way towards changing your mind.

Bocor most likely has some goons within the Circle of Thorns running the ritual, which means you'll have to bust in there and stop them before Olivia's soul - and the information for her bank account - is lost.

You receive word from one of your contacts that the system of caves that the Circle is in actually starts all the way in St. Martial. Looks like you're in for a bit of a walk.

If Olivia Starr tries to trick you with this, you'll be sure to somehow find where her soul goes and make her living afterlife hell.