There are some alignment missions he appears in that need their content added. 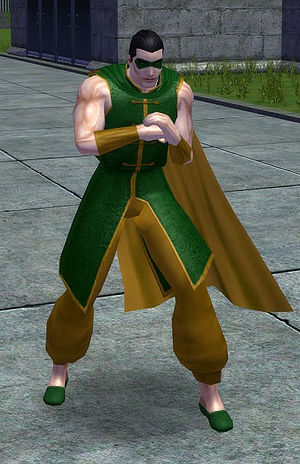 Sky Dragon is a Boss who is aligned to the Paragon Heroes.

Sky Dragon is master of a mystical martial art known only to a few Eastern sorcerers. He has come to Paragon City to defeat villainy in all its forms.

During the mission Defeat Sky Dragon in Paragon City:

Before combat: +++ Missing Information +++
Combat start: "Ah, Character, I was wondering when you would show up?"
75% Health: "You don't know your true Destiny do you? If you did you would be fighting with me and not against me."
50% Health: "You really know how to fight, I will give you that, too bad you are too stupid to realize that your Destiny lies elsewhere."
25% Health: "I will see that your Destiny is fulfilled, even if you don't!"
Upon defeat: "As it has been foretold! I... have been... defeated."

Sky Dragon's weakness seems to be a substance named Ultra-Magnesium, which when set in moonlight for nine days while soaking the tears of wise men would permanently strip him of his powers on exposure.