Foreshadow is a signature hero belonging to the W.I.S.D.O.M. hero group. He is also a hero trainer in The Hollows. His coordinates are (2516, 0, -3795). His location is marked on the map as a contact.

Villains face him in the 'Meet' with Foreshadow mission from Scirocco for levels 40-44.

Some say Yu-sik Jin is a powerful spirit who was placed upon the earth to help the good and punish the wicked. Even when he is defeated, Foreshadow has reincarnated to once again take up his destiny. He possesses an amazing constitution and superior martial arts abilities.

A young hero with a very old soul, Foreshadow is reborn generation after generation, alternating between good and evil. When he is in his villainous incarnation the world trembles. Currently, Foreshadow is a hero, working diligently to atone for the actions of his former evil incarnations, swooping in from the skies to fight evil with his focused Chi blasts and superior martial arts. 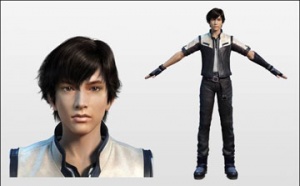 Foreshadow's appearance in the Korean version of the game is quite different to his more westernized superhero spandex costume.