Single contact option
There's someone I know who could give you a few leads.

I'd like you to meet a little fellow we call Julius the Troll. He's a Troll, all right, but he's not like the rest of them. He's determined to see the Hollows returned to its natural state. He can give you good tips about Trolls activities, and a few hints about those strange Magmite creatures. Julius can usually get his hands on Magic and Natural Enhancements.

You'll have to look past Julius' appearance if you're going to deal with him. Deep down, I'm convinced he's one of the good ones.

When the Paragon City police needed an officer to go undercover among the Outcasts, Freddy Tindle's low level electrical powers made him the perfect man for the job. Perhaps because of the dual life he's leading, Freddy's trust isn't won easily. But once he decides that a hero is worth believing in, he'll do anything to help that hero out. Freddy's superiors have recently criticized him for giving his hero contacts too much information, thereby putting his own status in jeopardy. But the way Freddy sees it, the heroes he works with are his comrades and closest friends. If he didn't give them all the information that might help them, he couldn't look himself in the mirror.

We'll make a good team, Character. If you can show me you've got what it takes.

You're a busy hero, Character, and my missions require your undivided attention.

I'm fresh out of leads. You should look up your other contacts.

Friend, I'm really beginning to like you. Let me hook you up with a few new Enhancements. Call on me whenever you need a hot tip.

I admit it: you've earned my full trust. I've got a few slick Enhancements stored away for heroes such as yourself.

You met him out in the Hollows, not the nicest of guys, could use a shave and a shower, but there was something about Flux that told you he was on the right side. He was a spy, infiltrating the Outcasts in the hope of bringing them down. It's rare that you see that kind of dedication towards a single enemy. At least in that you respect him.

At first, the missions Flux gave you were nothing more than errands any beginning hero could perform. But then, Flux let you into his confidence.

Frostfire, founder of the Outcasts was set in your sights. To think this guy once considered himself a hero. How far we fall sometimes. You defeated him. It wasn't your easiest fight, but you managed it. As you looked down at his body, you get the briefest flash of yourself in his position. 'It could happen to any of us',a voice inside your head tells you. Before you leave Frostfire, you rip off that stupid little emblem on his T-Shirt as a reminder of what could happen.

'Not to me, you think' as you walk away, hopefully never looking back.

Stop the Outcasts' raid on the Troll cave

Note: this arc may start with either this mission or Rescue the Cops from the Trolls

Check it, I've got a hot tip today. Some of my 'buddies' in the Outcasts are planning a raid on a warren infested with Trolls. If you can get there, you can put a lot of bad guys in jail. If you can't? Well, the caverns around the The Hollows are anything but stable, and the Outcasts are hoping to bring that cave crashing down on the Trolls. Just in case their powers aren't enough, they've brought along a couple of bombs to finish the job.

This could get ugly, Character. The Trolls may be on the wrong side of the law, but I don't want to see them buried alive.

If those caverns collapse, it'll be on your head and mine. Don't let that happen.

You stopped the Outcasts from collapsing the Trolls' cavern.

Before combat:
Outcast: "You Trolls better start looking for new digs."
Troll: "Deal with these jokers. And fast."

Before combat:
Outcast: "You junkies are history!"
Troll: "Heroes! Get 'em!"

Thanks for taking care of that Outcast bombing, Character. I have to admit, I was a little worried. It's hard being deep undercover sometimes. All the lying, the dishonesty. You start to wonder whether you're the same person you used to be. But then you help a hero do something good for the world, and you know. You know you're exactly who you wanted to be all along.

Rescue the cops from the Trolls

I've got a tip for you, Character, and it's a doozy. The Outcasts have learned that the Trolls are planning a raid on the abandoned office Lt. Wincott's been using as a base of operations. The unit is made up of trained men, Character, but they can't stand up to the Trolls in a fair fight. I need you to rescue those cops from the Trolls. A lot of good men's lives are on the line.

I'm counting on you to save those men, Character. A lot of them are my friends.

The police can't hold out against the Trolls forever! You've got to get over to that base!

You hear the rattle of heavy weaponry and the shouts of desperate men.

You stopped the Trolls' raid and rescued the officers.

Trollkin 1: I crush you!
Trollkin 2: I grind your bones!

Before combat: We kill all!
Combat start: No survivors!

Officer Jaffney: Listen. I've learned something!
Officer Kelly: Oh, Character! I knew you'd come!
Officer Klein: They would have killed us!
Officer White: You got here just in time!
Officer Yancey: We couldn't hold out much longer!

According to Officer Jaffney, the Trolls have a lot of human prisoners somewhere. That's a lead we'll have to follow up on.

Hit the streets and take out a few Outcasts

I think it's time to trust you with the biggest secret I have to offer: the location of Frostfire's hideout. Frostfire is the Outcasts' founder, and he's still their most respected leader. If you could take him out, you'd put a real dent in Outcast crime. Only trouble is, if I just send you to his hideout, it could mean my head. The Outcasts will know someone betrayed them, and it may not take them long to think of me. So first I need you to hit the streets and take out a few Outcasts. Then you can claim you learned the base's location from them.

Keep asking about the hideout. It doesn't matter if you get an answer or not; the only thing that matters is that you put on a good show.

I need you to interrogate a few more Outcasts. We've got to sell this lie, Character.

You defeated enough Outcasts to divert suspicion from Flux.

Thanks, hero, I owe you one for that. By now the word has circulated among the Outcasts that you're tearing a swath through the Hollows, hot on the trail of Frostfire's hideout. That should keep them from guessing that I'm the one who sold them out.

All right, hero, it's time to shine. I need you to get to Frostfire's hideout and take him out. It won't be easy. Frostfire has the respect of all Outcasts, and he'll be well-defended. I hear his hideout is a network of small strongholds, which can only be access by those with the correct keys. You've got a big job in store, my friend.

I'd recommend you bring along some teammates; Frostfire won't go down without a tough fight. He's far more dangerous than the other Outcasts you've faced.

Frostfire's lair is guarded by the most powerful artifact the Outcasts have collected: the Warding Altar of Trefalgar. You'll have to destroy that completely. Once you make it past the altar, you'll be almost to Frostfire's inner sanctum. Then, you'll have to take on Keystone. He's a powerful Brick who guards Frostfire with his life. If you can get through him, there'll be nothing standing between you and Frostfire.

I want to see Frostfire behind bars! 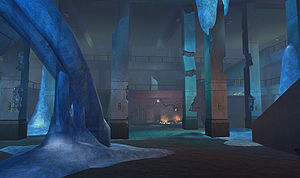 The metal of these walls looks as though it's been melted and frozen repeatedly.

A great shudder stirs the air, and you hear a door creak open.
You defeated Frostfire!

Before combat: Random Outcast 1: I hear Character's been looking for this place.
Random Outcast 2: S'okay. Achilles says as long as this altar stands, no one may pass.

Before combat: N/A
Combat start: No one gets to Frostfire without going through me!

Keystone was carrying a small metal artifact; it looks as though it may be a key.

Start of battle: How could anyone find me here?
Character defeat: Iced ya!

With Frostfire out of the picture, the Outcasts will have a hard time picking up the pieces. I don't really know what that'll mean for me. Maybe the force will pull me out, or maybe it's time for me to go even deeper under. One thing is certain: it's time for you to move on. There's nothing more I can show you around here. But the Hollows run deeper than the Outcasts and their petty tricks. If you want to learn more, you should go see Julius.

First thing's first, Character. You got to be cautious. I'm putting my hide on the line for you here, and I sure hope you're worth it. If you're willing to work with me and be discreet, I can give you tips on what's going on with the Outcasts. First, I'd like to see you take to the streets and arrest some of my so-called friends. The police in the Hollows are fighting a battle on two fronts, and the Trolls are too strong to make a move on yet. We have to start with the Outcasts.

We'll see what you've got, hero.

If you think you've arrested enough Outcasts to impress me, you've got another think coming.

You decreased the Outcast presence in the Hollows.

Well, well. You did pretty good out there. I think I may be ready to spill a few of my secrets for you. Just remember, this is serious business.