Arctic Sun is the forum name of Jesse Scoble, the Web Content Developer for NCsoft.

Responsible for many of the villain group backgrounds found on the official website and wrote the Paragon Times articles Statesman's Strike (October 27, 2005) to President Marchand Celebrates 70th Year in Office! (September 27, 2007) under the pen name of James Stark.

On September 18, 2007, Jesse announced that he would be leaving NCsoft to pursue an opportunity as a Senior Writer at a company in Toronto. His last day for NCsoft was Friday, September 21, 2007. [1]

On Thursday, September 27, 2007 Arctic Sun left the City of community with a bang, and one last article to puzzle all with hints about the soon to be revealed, issue 11. 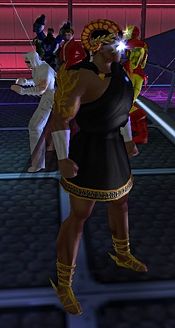 Arctic Sun, as seen at the Halloween Event party on October 31, 2006
Retrieved from "https://archive.paragonwiki.com/w/index.php?title=Arctic_Sun&oldid=269058"
Category: