This article is about the villain contact Abyss. For the Rogue Isles zone, see The Abyss.

I know someone you should meet.

Tavish Bell Tavish Bell is a Crey Security Chief in charge of sub-contracting their security to independent operators like yourself.

Have you met Operative Grillo? He's a rather driven man, coordinating SciTech projects for Arachnos. I know he's looking for a few Arachnos loyalists to aid him.

Who Abyss really is remains a mystery. She showed up recently with costume pieces and gadgets belonging to several heroes who recently went missing. Heroes that Arachnos had put bounties out on. Impressed with her tenacity and obvious skill, Lord Recluse has let her run free in Grandville, doing whatever she pleases. Abyss gets results, and expects the same of you.

You here to pick up the slack? I've got some contacts that are beneath me. You can deal with them if you'd like.

I can't trust you to get the job done when you can't even finish the jobs you have.

All the contracts I have left I want to handle personally.

You agreed to help Abyss out by recovering a crate left for her by Dr. Forrester. Abyss said the crate was marked with the codeword 'Dark Matter' and even though the Council, and their Nictus Hunters, were looking for it, you found it first. It contained two Void Hunter rifles, and four power cells.

Abyss then had a list of four Kheldian targets in the Rogue Isles that needed to be eliminated. With two rifles, you agreed to split the duty and the bounty. You took out Detective Kyros and his cadre of PPD officers. Abyss dealt with her target, and warned you the next one might not be as easy.

Abyss had tracked down where Sunstorm had holed himself up, and gave you the location while she tracked down the last Kheldian. Arriving at the underwater Longbow base you found Sunstorm and put the hurt down on him with the help of the Void Hunter rifle you had. When you arrived back Abyss told you that her target had simply disappeared and thus the reward to split was going to be less than anticipated.

Get Void Hunter rifles for Abyss

I've been told to trust this Dr. Forrester guy, but I have my doubts. That's why I am going to send you to pick up a shipment he has for me. A couple of Void Hunter rifles stolen from the Council should help me take out a few of those pesky Kheldian heroes that have been harrassing the Rogue Isles recently.

If I were the Council, I'd want those rifles back. I had Dr. Forrester mark the correct crate with the codeword 'Dark Matter', so you shouldn't need to open every single crate looking for them.

Unnecessary solicitation: Get those Void Hunter rifles that Dr. Forrester left for me. The crate is marked with the codeword 'Dark Matter'.

This is a big warehouse. If the Council is here, it may take them a while to find the exact crate.

You found the rifles!

Excellent. I hope having the crate marked made things easier on you in finding it. Sounds like the Dr. Forrester guy is trustworthy after all.

Coordinate with Abyss and take out a Kheldian Cop

Now that I have these rifles I can start taking out those Kheldians. Tell you what, since there's two rifles here, why don't you help me out. These four Khelds are scattered, and once word gets out that I'm after them they will be a lot harder to track. If we coordinate, we can take the first two by surprise.

Your target is a PPD cop named Detective Kyros who's way outside his jurisdiction pursuing an escaped villain from the Zig prison in Paragon City. Kyros is a Peacebringer and causing a lot of trouble. The Void Rifle should make short work of him though. He and his PPD team are hiding out in the sewers planning their next attack.

Upon accepting this mission, you will earn a Void Hunter Rifle temporary power.

These sewers look like they have been heavily traveled recently.

You made short work of Kyros!

Before combat: All in a day's work.
Combat start: Come out of the shadows and into the light!

Great work. The other Kheldians might be a bit better prepared now, but I think you can handle it.

With us taking out two of those Kheldians, the other two are running scared. I found the location of Sunstorm, so you should take him down while I track down the other Peacebringer.

Sunstorm is going to be tough to take down, so you should consider looking for some backup. I don't care how you split up your share of the loot with your buddies, but that's not my problem.

Sunstorm is an experienced Peacebringer, so don't expect the exact same tactics that Kyros used. The Void Hunter rifle has only the one power pack left, so don't waste it.

Upon accepting this mission, you will earn a Void Hunter Rifle temporary power.

This underwater base is where Abyss said Sunstorm was holed up

You have defeated Sunstorm!

Before combat: Character took out Kyros, and Abyss took out Brightshade. Looks like they are taking out the Kheldians here in the Rogue Isles, so I'm going to have to lay low.
Combat start: Character? You might have bested Kyros, but you won't roll over me that easy!

Well, my target escaped. No clue left where she went. Good to see you took yours down, but the fact that the job wasn't 100% complete means the payout was cut in half. Here's your cut.

Abyss offered you a job defending a Crey lab from an attacking hero. You entered not knowing what to expect, but Ms. Liberty was certainly not on the agenda. After a brutal battle you defeated her, but her emergency Medicom teleporter took her away before you could truly finish the job.

Crey was pleased with how well you took care of Ms. Liberty but they wanted to strike back at the Vindicators for daring to interfere with their plans. They asked Abyss specifically to sub-contract you to take on the Vindicators, and you began by stealing the location and passcodes to their base from a Longbow base near the Rogue Isles.

With the location and passcodes in hand, you took an Arachnos Flier to Paragon City and entered their base. Each battle was brutal, but in the end Luminary, Valkyrie, Mynx and Ms. Liberty fell to your blows. Word spread quickly that you were a force to be reckoned with.

I just got a call from my Crey contact. They have a lab in Paragon City that's under attack. They wanted to hire me to take out the hero that's attacking them, but since they don't know which of the fifty thousand heroes in Paragon City it is, I told them I'd have to pass the job on to someone else. That someone is you. If you want this job, just say so and I will make the arragements for you.

If it truly is a hero attacking them, you may want to bring along some associates to help you.

This Crey facility seems to be secured by Freedom Corp forces.

You have secured the Crey facility.

Once free: Thanks for the hand... Let's go get those Longbow jerks.
If refound: There you are.

Before combat:
Combat start: Character, it's about time we crossed paths.

Ms. Liberty was there you say? I almost regret not taking the job myself. I'm impressed you were able to take care of her, she can be a handful for even the best of us.

Steal passcodes from Longbow base

I don't know what you did to please Crey so much, but they asked if I could sub-contract you to take care of this next job. They want to strike back at the Vindicators, Ms. Liberty's supergroup, and they want you to lead the charge. First things first, you will have to get the location and passcodes from a Longbow base to the Vindicators' base.

Once you have the passcodes, Crey wants you to check back in with me.

You have the passcodes and location of the Vindicators' base

Abyss looks you up and down

Hmph. I didn't think you had it in you.

Take out the Vindicators

Crey is impressed, and I must say that I am a little bit myself. Now that you have the codes and location of the Vindicators' base, you can attack it at your leisure. Most likely you'll be facing the Vindicators themselves, so you'd be wise to bring along some allies.

Good luck... You're going to need it. 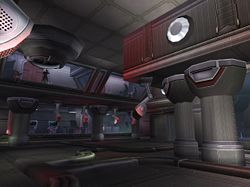 This is it. The base of the Vindicators

You defeated the Vindicators!

Before combat:
Combat start: This kitty's got claws!

Before combat: I've waited for my day in the spotlight!
Combat start: Now it's party time!

Before combat: One on one...
Combat start: Time for a rematch, Character!

You certainly proved your worth. The Vindicators are second only to the Freedom Phalanx.

Abyss does not have any missions out of her story arcs.