The 2006 Winter Event ran from December 14, 2006 through January 2, 2007, and additionally from January 8, 2007 through January 15, 2007. It ran in two phases. The first phase (which began on December 14) involved gift temporary powers that players may give to each other and a hero/villain cooperative mission run out of Pocket D. The second phase (which began on December 18) was a repeat of part of the previous year's winter event, with presents scattered across the city for characters to open with various results.

So shiver, witches, in the cold,
And pumpkin-heads will rot with mold!
The human world will freeze and slow,
And people will be filled with woe!

For human time will be like Fey,
Unchanging! Always time to play!,
They'll know that this was Snaptooth's plan,
We'll terrorize the world of man!

We've gone and done the greatest crime,
We've captured little Baby Time!
You'll never save the little year
For Red-Caps are the ones you'll fear!

Players logging in are awarded the Cold Front Badge badge, the Holiday Spirit temporary power, a single use of the Holiday Cheer power, and the Ear Muff. This power can be targeted on another player and when used will give that player a single instance of the Mystery Gift power.

Mystery gifts, once received, can be activated to receive one of a number of things.

More instances of the Mystery Gift power could be earned via the second phase of the event. 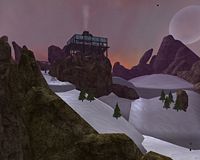 In Pocket D a new area was opened. A Ski Chalet, complete with it's owner, Father Time. The new area was accessed via a door upstairs in the villain side of the main Pocket D club. The chalet had a couple of ski slopes where characters can ski around. The main chalet also was home to Father Time himself.

Father Time's Ski Chalet gave access to the map area outside the main Pocket D club, including one new exploration badge. The badge was reachable via flight, superjump, or teleportation (which worked in the Ski Chalet area). For superspeedsters, the GvE Jump Pack was enough to get to the badge. Beyond these, assistance was be needed.

Father Time presented to players a mission to save the Baby New Year. Completing this mission earned the player a choice of one of four different badges. Two of the badges unlocked costume pieces, two granted temporary powers. Father Time's mission could be accepted an unlimited number of times by any character, so it was quite easy to run it four times and earn all the different rewards. Like the missions in the Valentine's Day Event 2006 event, Father Time's missions were cooperative missions that can be completed by combined teams of heroes and villains.

In Father Time's mission a number of defeat badges may be earned, including two Croatoa badges that are normally available only to heroes, but which may be earned by villains during the event. 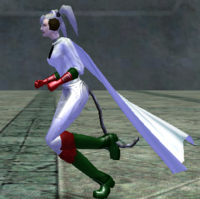 Awarded with the Cold Front, Frosty, and Crystallized Badges.

Everything from phase 1 continues as the second phase is unlocked.

Phase 2 was mostly a repeat of the third phase from the Winter Event 2005.

Additions to this year's event included additional instances of the Mystery Gift power as "nice" rewards, and "naughty" spawns would occasionally include the Winter Lord Giant Monster from the Winter Event 2004. Spawning the Winter Lord was based on team size, and required teams of five or more characters opening presents.