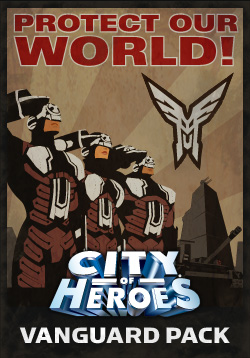 This item pack is part of the Seventh Year Anniversary Event Loyalty Program available only by maintaining an active account for the three months preceding City of Heroes' 7th Anniversary. All these items can be unlocked on a character by character by purchasing them Vanguard Merits with the exception of the non-combat pet (see below). Accounts with the Vanguard Pack have them unlocked automatically on all characters from character creation onward. It was implemented on April 28, 2011