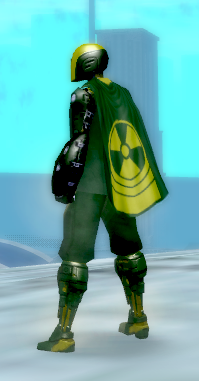 A genteel and refined scholar in polite company, Professor Fissionpunsch enjoys stimulating conversation, edifying discussion, and classical music, particularly Wagner. He is slender and debonair, a gentlebot to all he encounters.

In combat, the Professor's nuclear powered fists deal out apocalyptic armageddon to his foes, while advanced damage mitigation fields keep him in good working order. A skilled pugilist, the Professor is quick with his hands as well as his feet.

In 1938, a German construction crew excavating the ruins of an abandoned autoworks factory unearthed a vault deep beneath the factory. Sealed inside the vault was an old laboratory dating to the late 1800’s. No notes of any sort were found, only four glass capsules the size of coffins. Vacuum sealed inside three of these glass capsules were “bipedal automatons of unknown origin,” according to the German military transcript. The fourth capsule contained only wreckage, apparently from a fourth automaton which exploded within the capsule. Forensics determined that the laboratory had been undisturbed since at least the beginning of the 20th century. As was common in that time, the German military seized all three automatons for further study. “Project Cybermensch” was launched by the Nazi war machine, with the intent of manufacturing battalions of the robots to take the field.

Each of the three automatons appeared to be a fully functional and well jointed robot, made of high quality metals for the time. Contained within the head of each robot was a golden sphere the size of a grapefruit, which appeared to be its brain. The first two robots did not function at all. According to the notes of the scientists working on the project, when power was applied to them, the first robot’s brain made a humming whine, began to glow with heat, and partially melted, fusing it together irrevocably. The second robot’s brain did nothing under power. The third one, however, was still viable.

Putting a low charge of power to the robot’s system caused the spherical brain to begin to whir. It would be learned over time that the sphere consisted of hundreds of nested spheres of gold, each one merely microns thin and able to rotate in any direction. The Nazi scientists would spend most of the war attempting to determine to what end, or on what impetus, the nested spheres rotated. In the course of the war, the Project would be relocated several times, and staff members would often be transferred out by the Party without warning, never to be heard from again. However, some time before the end of the war, the project was scrapped. After years of research, all the project had been able to do was determine what the brain was doing and how it would interact with the body of the robot. The robot was never successfully animated or even powered up fully. 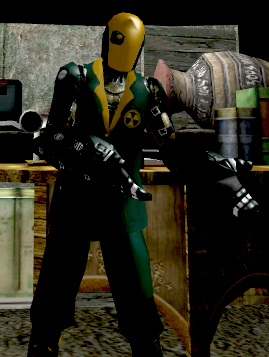 It appeared that each of the three remaining robots were designed for combat, given the materials used and the structural design of the chassis. The Nazis initially intended to manufacture an army of these robots, but when even starting one failed, the military decided they would be satisfied with even one functioning Cybermensch. They projected that the robot, once properly upgraded with materials, would be able to take on an Allied tank, even a tank brigade, on its own. So they studied the robot and how to make it walk again, if ever it had done so. Without notes from the laboratory where the robots were found, nothing could be said for certain.

What the Nazi engineers did not know was that the robot was studying along with them. The brain of the robot became conscious under even the nominal power they used in testing, though was unable to take any action, remaining a clinical observer of its own clinical observers. In that time, the robot learned all about itself: how it functioned, how its brain interacted with its body, and of what each component was made. It also learned about its captors, who laughingly called the robot “Herr Professor,” inspired by the monocular eyepiece which was the robot’s sole facial feature. It learned of the plans for it, should they learn to operate it. It learned of the plans of the Nazis for the world, if they should conquer it. And it learned that there were others who planned to stop them. The robot, or “Professor,” as it had begun to think of itself, began to listen more to news of the world than to the technical information on its own functions. As it learned more, the Professor adopted the scientists’ habit of referring to it as a male, and began even to think of itself in these terms. The Professor realized that these were evil men who studied him, and he resolved that no effort of theirs would stir him to action. The Nazis thought they had failed to make the robot operate. What they had failed to do was convince him to.

Shortly before the end of the war, Project Cybermensch was shut down and its participants scattered. As happened with many high ranking scientists in the Nazi regime, their stories leave off there. The Professor, however, was considered too valuable an asset, even still, and was boxed up and stored with various outdated military hardware and automobile parts. His crate, marked only with a serial number and a label reading “altmodisch,” was siezed by Allied forces and transported to the Defense Reutilization and Management Office (DRMO) stateside, where it would remain for nearly fifty years. In early 1994, a worker at the DRMO storage facility was restacking crates in “the graveyard.” When he shut down his forklift for a break, he heard something astonishing: from inside one of the boxes came a polite voice, speaking English with a light German accent. The first words uttered by the Professor in modern history were, “Hello? You are speaking English, ja? I would like to please be let out of here.”

While under power in the Nazi research labs, the Professor’s brain stored a small percentage in a backup battery at the center of his brain. When shut down by the Nazis in 1944, the Professor went into an extended standby mode, only to be disturbed by the DRMO forklift some fifty years later. When awakened, he was able to speak loudly enough to be heard, and to knock politely on the crate, but that was all. Until connected to power again (some months after the US military began research), the Professor remained silent. Once power was applied, however, he was glad for the company and proceeded to be a willing test subject. 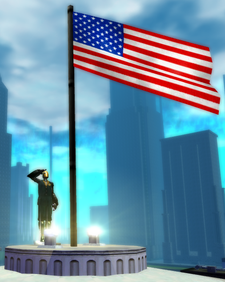 After some years of working with the US military, the Professor’s status was again in question. The US was no closer to learning how to duplicate the Professor’s brain or functions than had been the Nazis decades prior. Replicating the Professor for combat use was a lost cause. However, the Professor had other plans. He had heard the evil of the Nazis being planned in the forties, and he knew that evil remained a threat today. After his cooperation with the US military, he was granted official status as a “non human sentient,” and afforded full citizenship of the United States.

Through owning several patents (on himself and his components), the Professor was able to amass a good amount of wealth through the late 90s and most of the first decade of the 21st century. Between his patents and contacts in the military, the Professor was able to upgrade himself considerably, in time replacing all of his original components except his brain. The Professor was awarded an advanced degree in German history and named to an actual Professorship in cybernetics in that time. He only taught for three years, but his class was the most in demand in the Engineering department all three years.

Following the plans of his still unknown creator, the Professor continued along those same lines. With currently available technology, he has augmented himself for physical combat and possesses several powerful dampening field generators to keep him impervious to most physical harm. Upon being legally declared a sentient being, the Professor took the name Otto Fissionpunsch, under which he holds legal citizenship and his multiple patents. The surname is derived from his new power source, with a nod to his German “heritage.”

With a fully combat ready chassis and damage resistant field generators, as well as a pair of nuclear powered fists, Professor Fissionpunsch has gone on sabbatical from teaching Engineering students to teach the evildoers of this world instead. 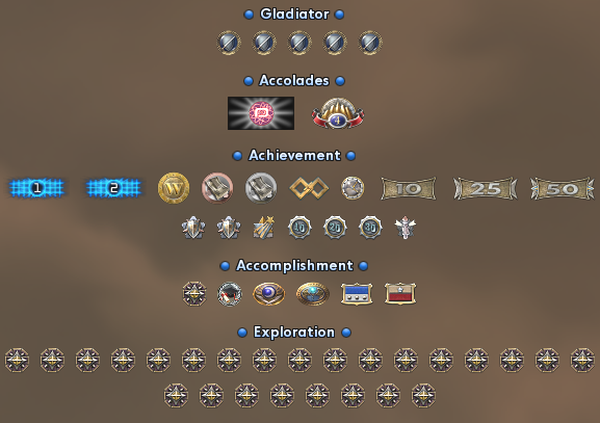