If you found this site through the CoH/CoV official boards, please take a minute to explore The Paragon Wiki site, which is the fastest growing CoX database on the internet. 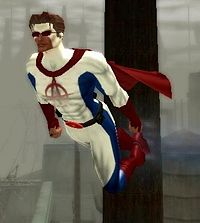 Phaeton is a character created in May of 2004 as a part of the supergroup Sanctum. As a part of the SG's efforts at creating the perfect team, I developed a Fire Blast / Devices Blaster, which was specifically designed to be balanced by the rest of the team.

In September of 2004, the team disbanded, citing real life problems. I resigned my City of Heroes account, and went on to play other games. In November of 2005, I rejoined the game and found my character stored on the servers (Justice, where all my characters are), still at level 15. Since then, he has grown to his current level, and can be found either playing with his supergroup, The Tempest Legion, or with his friends at Justice Radio.

Ingame, I can be contacted at the Global Chat Handle "@Phaeton". If you are interested in teaming, please send a tell before sending the team request--I traditionally ignore blind invites.

I am reachable at jasonnellis@gmail.com.