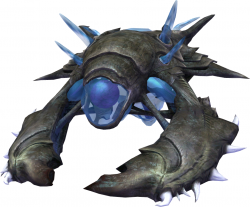 The Seed of Hamidon is a Giant Monster and zone event in First Ward. It patrols the skies around Sunken City, deploying Seedlings in its wake as it attempts to recolonize the area as a Devouring Earth colony. It is up to you and your team or League to undermine the Seed's defenses and bring it down.

The Seed of Hamidon event is designed for 8 or more players.

The Seed of Hamidon can be seen from miles away, spreading the Hamidon infestation throughout the Sunken City. The Seed surrounds itself with a thick cloud of spores and uses its Seedlings to manipulate their properties, giving it massive powers of control over everything in its vicinity.

Refer to The Seed of Hamidon within Devouring Earth for a list of its Powers.

When the event timer starts, the following instructions will pop up on your screen:

You hear the voice of Vanessa DeVore projecting itself into your mind...
Character! Clear your thoughts and focus on my voice - we'll only get one shot at this!


The Seed of Hamidon is a powerful beast, capable of spreading the Tellurian Plague throughout First Ward.


Gather your allies and destroy its Seedlings, before we are all undone!

Near the end of the fight:

Fear. I can feel it. The Seed is afraid...
No... no pity! It is a monster - finish it before it can redouble its assault!

As the Seed of Hamidon floats around the zone, it will spawn Seedlings of various types to support it. Seedlings are Bosses in and of themselves, and many have some outrageous capabilities and should be handled with care. The following types of Seedlings will appear during the event:

For each Seedling defeated, members of the team will receive a Buoyant Membrane temporary power:

Defeating enough seedlings within or near the Seed's sphere will lower the Seed's debuffs and resilience, allowing the group to defeat it.

Completion of the Seed of Hamidon event will award players with 5 Reward Merits, the Germinator Terminator badge and the Devourer temporary power:

Additionally, players who defeat one of each type of auxiliary Seedling (not necessarily during the same event; Malignant and Tellurian Seedlings are not required) will earn the Full Spectrum badge: