Can the paragraphed descriptions of challenge levels be unified?

Challenge Level 1: Heroic (Heroes) or Villainous (Villains)
At Challenge Level 1, enemies will typically be equal to or a level above your character's level and the number of enemies will be at a base number. If you are attempting missions by yourself, bosses in the missions will instead be lieutenants with reduced hit points and power effectiveness, though they will retain the same powers as a normal boss. Similarly, Archvillains will be Elite Bosses when the team has less than six players.

Then have the list of Field Analysts and Fateweavers

I have added (I hope correctly) the Challenge level settings which now appear in the in the Mission Window. To me these are a great additon, it means I (or mainly new players) don't have to remeber the difficulty order of Notoriety/Reputation

Note: Things like story arc level limits, certain special missions, outleveled contacts, and level limits of certain enemies and groups can affect spawn sizes and enemy levels...as well as TFs and Trials. All those things can cause some odd level and spawn differences. Larger teams can also add a level to everything in the mission. The settings outlined above are just general rules of thumb for "normal" missions.

I wrote that original forum post you referenced and have corrected, updated, and refined it many times since then after exchanging a few PMs with Statesman over it. So, yesterday I updated the article with all of that information, including the Issue 7 AV/Hero spawn changes. --Dwimble 01:13, 7 July 2006 (PDT)

Reputation also has to do with zone PvP. Not sure if that should be mentioned, thought I'd throw it out there.

Was wondering about that. Just went through and changed what was once known as Reputation to Notoriety, as that's what both the Fateweavers and Field Analysts call it. Reputation's article is now about PvP Reputation.--Konoko 16:56, 26 November 2006 (PST)

Field Analysts call it notoriety? That's weird, I know they used to call it Reputation. shrugs Oh well. Hopefully they'll change it again to something else at some point. I don't like the thought of my heroes being thought of as notorious. --TonyV 06:14, 18 December 2006 (PST)

I was under the impression that was a bug. If you install just CoH, it's called reputation. If you install just CoV, it's called Notoriety. However, if you install CoH and then CoV, both games end up calling it Notoriety, as a bug. Just like occasionally, you'll see "malefactor" and "lackey" on heroside as well. That's all from memory though, and not from any sort of official source, so I don't know if it's accurate. And maybe it's fixed by now, too... I'm not in game at the moment to check, and you guys were talking about this 6 months ago, heh. -- Sekoia 03:41, 1 July 2007 (EDT)

Trouble is, you can't just install CoH or just install CoV or install both. Any and all install methods for CoH/V will wind up with the same Game Client. Installing from the original CoH box and letting the updater run will give you a CoH branded login screen. However, if you have CoV on your account then once you login you will be able to play Villain characters.
That said, I do not doubt that Notoriety was once called Reputation in CoH before CoV came out, and that it was displayed differently during Issue 6 or 7. I wasn't as observant about such things back then, and don't have quick access to the patch notes.
I just skimmed the CoH_Manual.pdf (updated 7/25/2005), page 130 has a little 'Statesman Sez' blurb about mission difficulty. --Konoko 09:29, 1 July 2007 (EDT)
Ah HA! Patch Notes: June they called it Rep/Not, July it was just Not. [2] [3] --Konoko 09:48, 1 July 2007 (EDT) 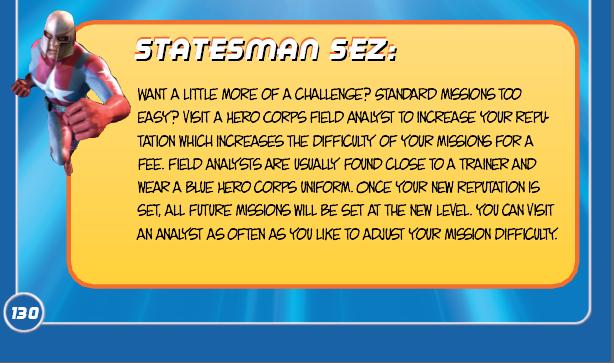 Just noting that some of the locations for changing notoriety (i.e. Grandville) are missing from the list. I10 brings a new location with it as well, if memory serves correctly. --Eabrace 03:27, 1 July 2007 (EDT)

What does it do?

So, increasing the size/strength of mobs will get XP and Inf faster. Is there any advantage to it beyond that? Is it strictly linear (foes = XP), or polynomial (more/bigger at same time = more XP per foe)? Are there any other effects, such as increased drops? Frankie

No, not directly. The code for enemy drops is based on a "per enemy" calculation, which doesn't get modified by the Notoriety/Reputation. A mob of enemies on the lowest Notoriety will have the same percentage chance to drop Inspirations, Base Salvage, Invention Salvage Enhancements, Vanguard Merits etc. The only affects that Notoriety have are the increase to level (more xp) and size of the mobs (more defeated enemies = more identical chances for drops). -- Kalon 19:15, 14 August 2007 (EDT)
Increasing number/strength of enemies is, in itself, an advantage of adjusting Notoriety as well, as different players find different levels of challenge enjoyable. Also, increasing Notoriety does not necessarily produce faster XP/Inf. It produces enemies that are worth more XP/inf when defeated, but that may take longer to defeat, or not even be defeatable. Corebreach 12:12, 15 August 2007 (EDT)