Needs more info in the overview, and better wording of the Films section (I speculate about inspiration of the stories - not sure if that's ok for the wiki). Additionally, it may be worth noting somewhere more prominently that it only ran for one year. Felderburg 16:06, 7 April 2014 (UTC) 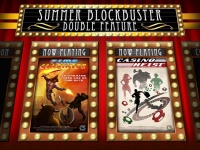 The Summer Blockbuster Event is an annual occurrence in "City of Heroes Freedom". It runs for one month during July every year since 2012. The event features different movie plot based missions that require unique tactics to succeed. Special badges, temporary powers, costume pieces, and a new Enhancement Set are also featured along with this event.

In order to participate, players entered the Theater Lobby instance, available via somewhere. Once inside, they did something.

In 2012, the two films were Time Gladiator and The Casino Heist. Due to the shutdown of the game, it is unknown if future years would have featured different films. While each film is completely fictional, The Casino Heist appears to be partially inspired by the real life television show Leverage.