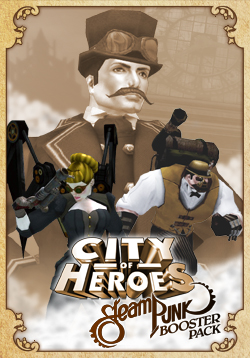 The Steampunk Booster was announced as part of the live 7th anniversary UStream developer chat and was made available on June 1. This pack unlocks new costume parts, emotes, auras, and a travel power inspired by the steampunk science fiction subgenre and "Victoriana noir".

As of City of Heroes Freedom/Issue 21, this item pack is no longer available. The costume pieces, emotes, costume change emotes, auras, and jump power are now only available through the Paragon Market.

Harness the furious power and speed of steam to rocket through the air. Steam Jump is a new travel power that is available at Level 4 and is similar to the Jump Pack. Steam Jump cannot be slotted and will automatically shut down after a short period of providing unlimited vertical movement.

Steam Jump has a 30 second duration during which the user can ascend at up to 30 feet per second, after which it must cool down for 30 seconds. Like Jump Pack, it does not add horizontal movement. If both powers are activated, the activation times add but the ascension rate does not increase (i.e. up to 60 seconds of 30 feet per second ascent).

Steam Jump leaves a visible trail of steam behind the jumping character.

The Steampunk Pack offers two new tintable auras, Victorian Décor and Clunker. The Clunker Aura, City of Heroes' first path aura, allows a character to leave a customized visible trail of falling gears and springs wherever it walks or runs. Either aura can be set as always active or combat only.

These emotes are unlocked for all characters on an account from creating onwards by purchasing the Steampunk Pack.