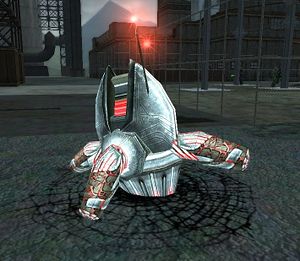 An enemy found in the mission Stop Rikti Bombing from Levantera. There are a number of these to defeat to complete the mission, along with a few captives to free. Watch out, as they have a ridiculously large blast radius and damage output (if they hit). It appears as Object rank from the Equipment faction.

Unlike the UXB dropped from a Rikti Drop Ship as part of the Rikti World Invasion event, this bomb will not detonate after any time and must be defeated, forcing the player in to danger.

The Rikti bomb has slightly less points than a Lieutenant of the mission owner's level, which probably means it's a Boss class object watered down. The bomb has no effects and can't defend itself, but will have some Rikti near guarding it. Like many other objects in game, it will spam the strange Provoke effect:

Provoke Taunt.
Periodically, nearby villains may turn and attack the object in an attempt to destroy it.

This is a Rikti bomb that has yet to go off.

The nearby Rikti say the following during the mission:

See the Rikti faction profile for a list of powers (To do: Maybe add to equipment faction page instead?)'