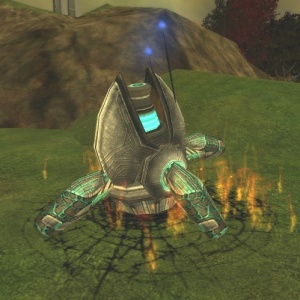 Un eXploded Bombs are dropped by the Rikti Drop Ship as part of the Rikti World Invasion. The UXBs, once they touch down, need to be defeated or they detonate. They appear as Objects, named A Bomb, and are considered Elite Bosses. Like Giant Monsters their attributes scale to players dealing with them.

Care should be taken when attacking UXBs, as other UXBs may drop nearby and explode. Some areas where UXBs appear (such as Skyway City's highways) may be high enough that players will be vulnerable to other attacks from the Drop Ships.

A Rikti Bomb that failed to detonate when dropped. It is apparently repairing itself.

When a UXB touches down, it is damaged (approximately 25% of total HP) and starts to repair itself. The light on the bomb starts blue-green (at 25% HP) and passes through yellow, orange and finally red (~100%) as it gains HP. Once fully repaired, the bomb detonates. The PBAoE detonation is quite large and is primarily typed as Energy damage, secondarily as Smashing damage, and also has a DoT of fire damage.

The Rikti UXB awards the same amount of XP and prestige to those players who damaged it regardless of how many HP it had when it was first attacked by players.