There are two types of presents that have made appearances in City of Heroes and City of Villains.

There are six types of Present inspirations, all of them using the same image and description text: "You received this holiday gift. Who knows what could be inside."

Please note that while the Gift of Life and Gift of Energy inspirations use an AOE animation, they will only affect you. Using a Gift of Life near a dying ally won't restore their health, only yours.

Gift of Life Heal [50%]
You receive the Gift of Life and some of your health is restored.

Lump of Coal
You were bad this last year. You got a lump of coal and nothing else.

These 6 types of inspirations are listed on the Auction House. The order changes from time to time, presumably whenever the server is reset. 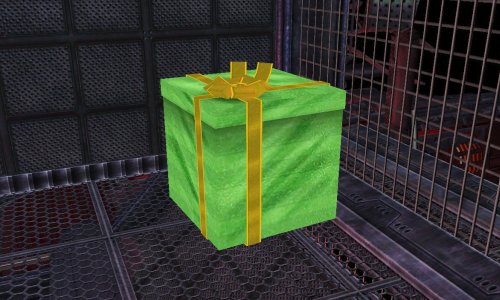 During this event, Heroes and Villains could also accept a mission that involved, for the villains, stealing presents en route to Paragon City; and for the heroes, to recover said stolen presents. Those presents were just mission objectives, though, and wouldn't trigger the Naughty/Nice event.

For the second phase of the Winter Event 2006, clickable presents came back in all city and PvP zones, with a couple of changes.

"Naughty" presents still worked just like in the previous event, with an important exception: if the player clicking the present was part of a team with five or more members, a Winter Lord had a chance to spawn instead of a single Winter Horde mob. This allowed players to get the Frozen Fury Badge, just like in the Winter Event 2004. However, defeating the Winter Lord no longer awards a Present inspiration.

"Nice" presents still drop the six types of Present inspirations, but they also have a chance to award the Stocking Cap costume piece, or a random temporary power.