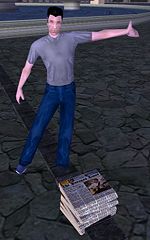 The Newsie in Founder's Falls

Newsies are NPCs that can be found in various places throughout Paragon City. They typically announce any changes which may have been done after an Issue update.

In Steel Canyon, the Newsie can be found outside of the south Paragon City Monorail station, at coordinates (-4712, 0, 2276).

Hey whats up? You want the scoop? I'm your guy.

Paragon Police move in to Faultline!

Major flooding in Faultline! Seismic changes on the moon to blame!

Crash Site has been declared a war zone! Heroes and Villains must unite together against a common enemy! Read it here!

The Vanguard have stepped in and declared White Plains a "war zone"!

Entrance to Rikti Crash Site from Crey's Folly has been CLOSED DOWN!

It's on! They're back! Heroes and villains unite against the Rikti!

New invention sets!! Super Rares, too! Heroes are more powerful than ever! Read all about it!

Extra Extra! Step right up! Heroes running around with two weapons in their hands! You got it! Dual Blades!

Can't hang on as well as you used to? Feeling weak? You need WILLPOWER! Read all about it!

Extra! Weird time travel stuff going on! Find out who Ouroboros is and how to get to them!

Something funky's going on in The Hollows! Gangs have moved in! Meg Mason helping PPD! Read all about it!