Mikey the Ear/Drea the Hook - Technically doesn't introduce you, but refers you to them.

Mongoose gained his name fighting Snakes in Darwin's Landing. He's a tough customer but knows Mercy Island quite well, so he's worth talking to if you want to learn a few things about the Darwin's Landing and Mercy neighborhoods.

You want to talk to me, you best talk to Kalinda first. Now get out of here before I feed you to the Snakes!

You must be one of the new arrivals to Mercy. They call me Mongoose, because I'm the best at what I do - taking down Snakes! If you want to survive on Mercy, you best learn what I got to teach you. If you're tough enough, maybe you'll move up the food chain in the Rogue Isles. Or maybe you'll end up dead in a snake pit. I don't really care - I get paid either way.

Why you comin' to me? I heard you got your hands full already.

I got nothin' more for ya, Character. Why don't you talk to Mikey the Ear or Drea the Hook in Port Oakes? They might have some heists for you to pull off. If you do enough to impress them, they might introduce you to someone new.

You might just survive Mercy yet, Character. I might just have something new in my store for you. Take my cell number. I'll do what I can to help you out.

You're tougher than I gave you credit for, Character! I can respect that. Look around my store, see if something is worth your time.

These are a pair of snakeskin boots, given to you by Mongoose on Mercy Island. You received them after you helped him cull the snake population in a tale you like to call:

It all started when you met Mongoose on Mercy Island. Mongoose was a professional snake hunter working for Arachnos, hired to help keep the Snakes population down. He got you to help him cull the snakes on Mercy, giving you a chance to prove your worthiness to Lord Recluse.

Mongoose then sent you to clear out a nest of snakes infesting the sewers underneath Mercy Island. In the Snake lair you found a strange statue on their leader, a roughly carved idol in the form of a snake. Returning to Mongoose, he mentioned finding similar statues in other Snake nests. Supposedly, the Snakes worshipped some sort of "snake godess".

Mongoose received news about the Snakes from a particular pit where staging strikes on specific Arachnos targets. Mongoose believed there was some sort of Snake leader behind these attacks, and sent you to take him down. You entered the snake pit and discovered in its depths a large Snake temple to their godess Stheno. You took down their high priest S'Thaco and returned to Mongoose for your reward.

As you probably noticed, Mercy is literally crawling with Snakes. As far as we can tell, they were once humans who were infected by some sort of big mutant Snake dug in way down beneath Mercy somewhere who infects people with the Snake-virus. At least that's what we speculate, 'cause we ain't found that mutant Snake yet!

Those beasts are fast and vicious, and some of 'em have a nasty venom that'll sting ya somethin' harsh! Lord Recluse has put a bounty on them, so if you're lookin' to get in good with Arachnos, here's your chance. Head over to one of the Snake Pits and take down some Snakes!

Snakes usually stick around pits which lead to their underground lairs. The entrances to these Snake pits can be found all over here in Darwin's Landing, and you might find a couple in the Mercy neighborhood as well. I know there are a few due west and due east of the clocktower. Oh yah, and they mostly come out at night. Mostly.

Huh. Not bad! Don't get too cocky though, 'cause there's far worse than Snakes around the Rogue Isles.

Nice work on culling the Snakes in the area! Usually we can keep them confined to the Snake Pits, but occasionally they tunnel or slither their way into other places. Speaking of which, we just got a report of a nest of 'em forming in the sewers underneath Darwin's Landing. Go in and clear out the Snake nest before it becomes a problem.

The snakes have most likely constructed their nest in the deeper part of the sewers.

What are you waitin' for? Clear out that Snake nest!

The fetid stench of the Mercy Island sewers is overwhelming. In the depths of this labyrinth of tunnels lies the Snake nest you've come to clear out

You cleared out the Snake nest!

You cleared out the nest? Nice work!

This snake statue? Yah, we see 'em sometimes in Snake nests. Some sort of 'snake goddess' they worship or something. I tell ya, those Snakes are vicious AND crazy!

This Snake cult was probably started by the same mutant Snake who transformed those poor suckers in the first place, likely to get them to do her bidding.

You've done some really nice work getting rid of those Snakes, but we've got a new problem. One of the Snake pits has become really active lately, with large groups of them attacking key Arachnos positions. There's probably some sort of Snake leader in the pit who is directing them against these targets, so we need to take this guy out. Head into the Snake pit and take out the leader and his minions. 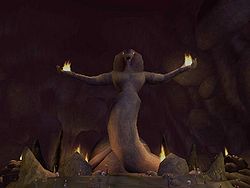 These Snakes defend their nests well, so you might want to look for some extra muscle to back you up.

The Snake hole can be found in the Mercy neighborhood. You can get there through the access gates behind me.

You take out the Snake leader yet? Get in that Snake pit and take 'im out!

All manner of waste covers the entrance to this Snake pit

You defeated the snake leader!

So the Snakes had a temple down there? Huh. We ran into Snake priests before, but we never thought they were this dug in. Well, this should keep down the Snake population on Mercy Island - for a while at least.

You're one tough customer! You should head on over to Port Oakes to see what kind of trouble you can get into there. Talk with Mikey the Ear or Drea the Hook when you get there.

I've been earnin' a few bucks here and there on Snake bounties, but I've got what you call 'expensive tastes'. So, if you're up for it, I got a job for you to pull off. There's a local bank that's just beggin' to be robbed. Hit the bank and bring back the money!

I'd do it myself, but I'm known too well around these parts.

One of the bank staff looks up and eyes you nervously.

Ah, sweet money! Nice work! We'll make a hardened criminal out of you yet!

Clear Hellions from Arachnos Base

Normally I just take care of Snakes around Darwin's Landing, but occassionally I look into other matters for Arachnos. I just got word that a gang of Hellions just attacked a local Arachnos base, setting it on fire. Head over to the base and take down the Hellions responsible.

You have 75 minutes to complete this mission before the base collapses from the fire and the Hellions escape.

Those Hellions think they're showing off, but they're just being annoying. Swat them down. 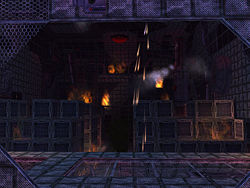 A wave of heat hits you as you enter the door. The Hellions have been busy

The Hellions were searching for magical artifacts? These guys are idiots! The local Arachnos base ain't got no magic! Anything magic found around here is shipped off to Fort Cerberus or Ghost Widow's tower!

Clear Snakes Out of Casino

Those freakin' Snakes get in everywhere! I just got a call from Larry the Eyes, owner of a local casino. Apparently there's a whole slew of snakes who have come pourin' into the place, wreckin' everything! Head over to the casino and cleaer out the Snakes.

Make sure you clear all the Snakes out!

You hear the screams from a few casino patrons and crashes from tables being overturned. Snakes are rampaging all over! 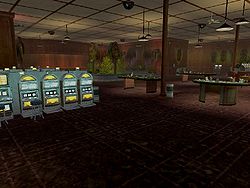 Nice work! Larry's gonna owe me for that!