Mission:Common - Put a stop to the gang activity in the office

Put a stop to the gang activity in the office

A group of gangsters has taken over an abandoned office in one of my old neighborhoods. It's probably the Hellions. They're always looking to take over new territory in their ongoing war with the Skulls. Will you put a stop to the gang activity in that office? You may have heard that before I joined GIFT, Genetic Investigation and Facilitation, I was in a gang. I used my mutant powers to take whatever I could grab. I'd like to prevent these youngsters from making the same mistake.

This is important to me, Character. We need people to feel safe in Atlas Park.

Once a gang gets a solid foothold in an area, it is very difficult to root them out.

Jeers and jibes can be heard all over this supposedly empty office. From the chatter it's apparent that this warehouse is home to a group of Skulls, not Hellions.

You defeated the Skulls and found a small sample of a drug labeled Dyne.

The Skulls? What are they doing in Atlas Park? Kings Row is their turf. Do me a favor and go talk to my friend Detective Jose Brogan. He'll want to take a look at that sample as well.

I heard there were some Skulls sniffing around Atlas Park, but I thought it was just a rumor. You might want to see what you can dig up in this supposedly empty warehouse.

Dyne is pretty new on the streets, so nobody knows much about it. It gives users a rush of euphoria and strength, but it leaves their whole body aching afterwards. Some muscle spasms and skin diseases have even been linked to Dyne use. It looks like the Skulls are looking for a new market in which to peddle their poison.

Defeat all Skulls in warehouse 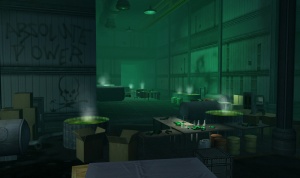 Detective Brogan knows what's what. Listen to him, Character.

The familiar taunts of the Skulls ring in your ears.

You defeated the Skulls and located a notebook.

Looks like this might be the beginning of a distribution plan. We will need to look this over and keep an eye out for Skulls activity. Thanks a lot for your help on this one, Character.