Missile Launch! is a mission that takes place in the Warburg PvP zone in City of Heroes and City of Villains.

If you successfully complete it, you will receive one of three temporary powers: Chemical Burn, Biological Mutagens, or Nuclear Blast.

Warburg has an underground missile plant that can launch nuclear, chemical and biological weapons. The situation with Marshal Blitz and his Rogue Arachnos gives you the chance to get in and take control of one of these missiles. However, it won't be easy.

The launch key has been divided into three code fragments, each in the possession of a different scientist. Intel tells us these men are trapped in the production facility underneath Warburg. You'll have to find each scientist and guide him to the surface. (Click on the scientist to tell him to follow you or stay put.) I'm sure he will give up his section of the launch code.

Once you have all three pieces, go back down and find the computer that launches the missile you want. The codes generate a launch key. If you can get that to the firing bunker on the surface, you can launch your payload. This gives you a temp power that you can use at any time in the game. There are three types of payloads, each of which gives a different temp power. You can have one of each temp power at any given time.

The Web is a complex system of underground tunnels. At first, navigating these tunnels may prove difficult.

The complex is split up into three primary chambers. Each of these chambers is labelled with a number: 1, 2, or 3. Within the tunnels, there are signs posted indicating which passages lead to or open into a numbered chamber. There are also red Exit signs that indicate the shortest passage that leads out of the chamber.

The tunnels are all linked together. This may be very helpful when attempting to lead a scientist to his or her research bunker since, depending on a hero's or villain's strengths, it may be much safer to travel underground and to find an exit close to the research bunker than it is to travel aboveground. If Warburg happens to be crowded, it may be to your advantage to take a longer route through the tunnel that exits closer to your faction's base, even if the total distance is longer.

First of all, players need to realize that Warburg, the zone where the Missile Launch mission takes place, is a very dangerous place. It is a PvP zone, which means that you will be fighting not only the local denizens, but other heroes and villains as well. It is literally a free-for-all, and there are player killers (PK'ers) that hang out at vital areas to complete this mission.

Worse, many of these PK'ers are able to one-shot almost any character of any archetype. And yes, these PK'ers tend to team up and kill anyone that comes near their group, and they will taunt you in the global chat channel. If you have a thin skin, you would do well to avoid this zone, as you will never be able to complete this mission for arguing in the global chat channel with other people.

Soloing this mission is very difficult because the zone is all players versus all players, including heroes versus heroes and villains versus villains. In other words, if you are attempting to solo this mission, you will be effectively competing against every other player in the zone.

That being said, here is how one completes this mission in spite of the chaos that goes on in this zone. 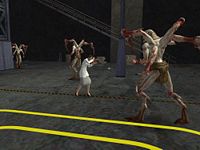 The first step to completing this mission is to rescue a lab technician from his or her guarding Arachnoids. The lab technicians are located in The WEB, a missile plant directly underneath the Warburg neighborhood marker. There are three entrances into this plant, and they are all connected by a sublevel. Note that you can only rescue one lab technician at a time.

Fine. Great. Look, take me to my research bunker and I'll make sure you're rewarded.

Get me to my bunker! I'll make it worth your while.

Me supposed to be super soldier. Why you make me... wrong?
You do bad things to us when we were in cages. No cage now!
I born here, this my home.
All of those experiments... You going to pay.
We protect this one. It have many secrets. It will help us.

Lead the technician to his or her base

After rescuing a lab technician you must lead him or her to his or her research bunker. The bunker will be marked on your map with an orange dot labelled "Bunker." The bunkers are outside the underground plant in various locations around Warburg. The bunker is an Arachnos base-type door, and though it is usually guarded by Arachnos soldiers, it is not necessary to defeat the soldiers to rescue the lab technician. All that is required is to lead the technician to the door.

Note that if you are defeated while leading a lab technician to a bunker, the lab technician will stand in place for a minute, where he or she may be "stolen" by another hero or villain or until you are able to return to that location. You may also instruct a lab technician to stop following you by clicking on him or her.

The Access Bypass Salvage that is awarded as part of the Break In/Smash and Grab side mission in a Mayhem Mission or Safeguard Mission can be substituted for one of the launch codes.

After retrieving the three codes, you will see the following message: 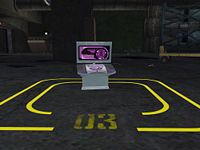 Once you have the firing code, if you get defeated by another player, you will lose one of the launch codes and will be left with the remaining two codes, and you will have to acquire another code by rescuing a lab technician and re-enter the new complete set into a payload computer again.

Fire the missile into orbit

Once you obtain the firing code from the launch computer, you will see the following message: 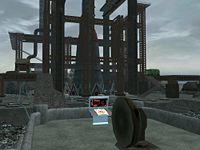 After getting your launch key by using a launch computer, you must use the firing console to actually launch the missile. The firing console is located just west of the missile silo at coordinates (-529, 28, -81), which is due east of the Warburg neighborhood marker in the center of the map.

Be careful, because the firing console is a popular camping spot for player killers (PK'ers), and it takes a few seconds to use the launch key, a few seconds during which you may be visible and vulnerable. If possible, you should use whatever means is at your disposal to boost your defense while entering the firing code.

Once the missile is launched, you will receive your temporary power. A hero or villain may have up to one of each of the three types in his or her arsenal at any given time.