This article is about the Praetorian villain Malaise. For the hero and Vindicator Malaise, see Malaise. 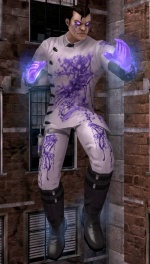 Malaise is a Praetorian Earth archvillain.

Heroes face him in the following missions:

Heroes and villains face him in the following Incarnate Trial:

On Praetorian Earth the villain Malaise was never counseled by Sister Psyche, instead he was one of the 'patients' at one of Mother Mayhem's facilities. With the ability to control his madness and inflict it on others, he quickly rose to a position as her favourite.