The Hellion Arson is a zone event that occurs in Steel Canyon. The Hellions are torching buildings and it’s up to the heroes to snuff them out! 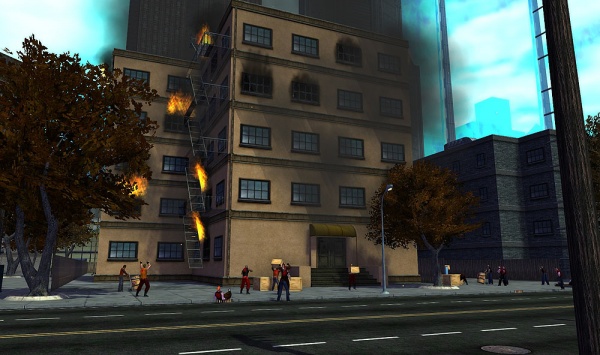 When a fire breaks out, a message will appear in windows displaying the Hero Zone Events Channel: "[FDPC] Fire Alarm sounded in Steel Canyon." Heroes in Steel Canyon will also see the location of the fire flashing on their map.

During the event, Hellions will attack in waves to start more fires and strengthen ones that have been partially extinguished. If the fires aren't put out fast enough, the building will explode, defeating any heroes that are in close proximity.

After the fire has ended, a message appears on the Hero Zone Events Channel: [FDPC] Fire Alarm cleared in Steel Canyon.

Since the Hellions constantly start new fires, it has been believed that it was better to leave the Hellions alone so that players can get access to the maximum number of fires for badge credits. But some more recent testing has shown that this may not always be the best strategy. It appears that the final explosion is not strictly time based, but rather is based on the building reaching a critical mass of fires after it enters the final phase of the event (as seen when you get the smaller explosion around the bottom level of the building). Once this final phase is entered, it is possible to clear out all the remaining Hellions. If this is done, no new fires will be set, and the building can never reach critical mass and explode. (People have reported clearing out the Hellion waves, and then watching the building burn for over 40 more minutes with no explosion.) This bug has apparently been fixed, though, so clear out the fires A.S.A.P. If you see the building explode, back off near the Chief for a couple seconds. If you see the Hellions running, then suddenly die, you know that it's over. If you are in the radius of the explosion, you will die and get debt. BACK UP once you see an explosion! 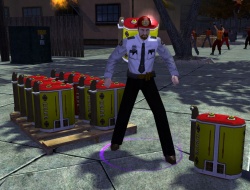