From Paragon Wiki Archive
Jump to: navigation, search
Incomplete
This article was incomplete at the time of City of Heroes' shutdown. You can help the Paragon Wiki by helping us complete it.

The Global Chat System operates on a separate server that is tied into each of the City of Heroes/Villains game servers in order to allow special chat channels to connect each game server with its siblings. Once a player joins a channel, they are able to send messages to anyone else in the same channel regardless of where they may be located in game (barring arena matches, which are blocked from global channels to cut down on cheating) or which server they may be logged in to.

Global channel membership is based on account, not character. Joining a channel on one character automatically makes the channel visible to all other characters on the same account. Additionally, non-admin accounts are limited to 15 channel memberships. In order to join a new channel after reaching a total of 15, a player must first drop out of one of their current channels.

Talking in a Global Chat Channel uses a player's Global Chat name/handle instead of the name of whatever character they are currently playing. Character name is still used in local channels (i.e. team, sg, broadcast, request, coalition, local, help.)

There are two types of global channels, Public and Private.

Public channels can be joined either from an invite from a person in the channel, or by using the "Join Channel" or "Channel Search" functions.

Private channels can only be joined through being invited by an Op.

There are three ways to talk in a channel.

If it's the default channel in the active tab, hitting the "A" button above the text entry box will make chat go there.

If you click the speech bubble at the end of the text entry box, you can choose to have it go to a specific channel.

You can also use the /send command. When using the command, the format is:

results in it trying to send "Channel <message>" to a channel named "Test".

White
Normal channel members - have permissions only to talk in the channel unless silenced. Silenced normal members are displayed with a white square next to their name.

Blue
Channel operators - can invite to channel, kick members, silence members, and swap the channel from public to private and talk in the channel.

Red
Channel administrators - in addition to the abilities of channel operators, can kick operators and see channel members who are hidden. Currently, this rank is only held by those with a special flag on their accounts (GMs, Developers, and other Admin), and the rank is auto assigned by joining the channel. 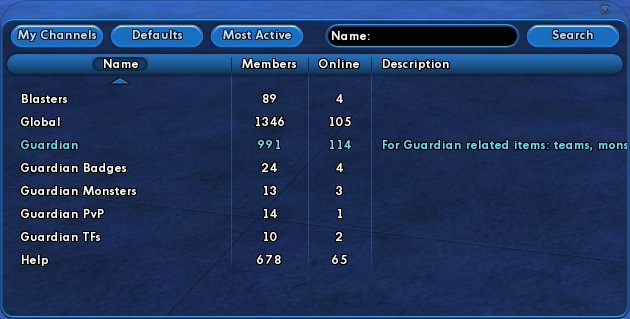 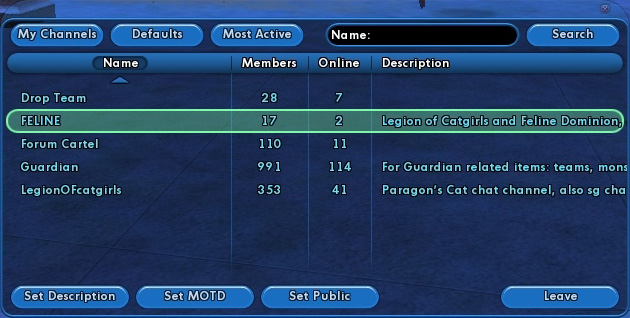 Who's in Channel GUI 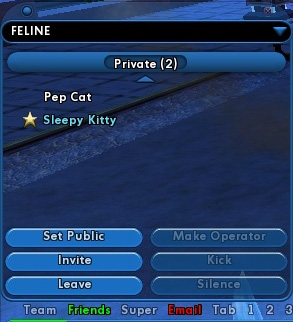 The maximum number of channels to which a player may belong at any time is 15.

Channels may have a maximum of 150 users on them at any given time.

Total membership in a global channel is limited to 2500. Once this limit is reached, no more players will be able to join unless a member leaves or is kicked from the channel. While full, the "Invite" button will be greyed out for channel operators.