From the Task Force "The Fall of the Clockwork King" given by Synapse. 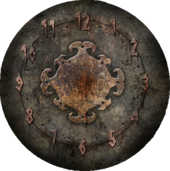 You've kept this small Clockwork part as a reminder of:

The Fall of the Clockwork King

Synapse the Speedster contacted you after detecting an electrical anomaly in Steel Canyon. While checking it out, you found a Clockwork minion carrying an electrical power router. When you found a second power router on another robot, Synapse sent you to Positron for advice. Positron guided you to the three power grid substations in Steel Canyon, where you battled the Clockwork to prevent them from stealing the city's power. Using a device created by Positron, you were able to find the headquarters for the entire operation and shut it down.

Synapse then sent you to Boomtown to search for the lair of the Clockwork King. After defeating a number of his minions, you found a distinctive mechanical piece amid the remains of one of the fallen robots. Synapse traced the piece to a storage warehouse and sent you to investigate. After you saved the foreman from some Clockwork attackers, he told you of three locations where similar parts had been shipped.

As you investigated the warehouses, it became evident that you were closing in on the Clockwork King. Armed with determination and one of Positron's inventions, you came face to face with the Clockwork King. Through your valiant efforts the King was captured for the first time!