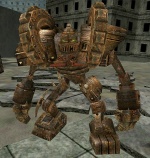 Babbage is a Giant Monster for the Clockwork.

Babbage can be found in the northern area of Boomtown and appears as an ambush during the Synapse Task Force.

According to the City of Heroes Giant Monster Guide, Babbage appears in Boomtown every 4 to 6 hours. This guide was written before Issue 8, which expressly increased the spawn rate. The current rate is unknown, but is definitely greater than the listed rate.

Babbage can be spawned in other zones from the ambush during the Synapse Task Force by using various powers such as the Ouroboros Portal or the Pocket D VIP Pass and then traveling to the zone where the players might want to spawn it. However, not all zones will allow Babbage to be spawned.

For reasons unknown, The Clockwork King created this giant automaton and loosed it upon Boomtown. Babbage seems chiefly interested in collecting metal scrap for its King, though it also fervently defends its territory from any hero incursions.

Ball Lightning (Ranged) Targeted Area of Effect (Energy), Foe -Endurance
Hurls a highly charged ball of lightning that explodes on contact. Ball Lightning deals good damage in an area and also drains some Endurance from each target it hits.

Lightning Field Toggle AoE(Energy), Foe -Endurance
You have been trapped by Babbage's Lightning Field. You are taking minor damage over time and being drained of endurance.

Tesla Cage Foe Sleep, -Endurance
You are trapped by a Tesla Cage. It does minor damage over time and drains your endurance.