From Paragon Wiki Archive
Jump to: navigation, search
Work in Progress
This article is currently a work in progress. As such, it may contain some editing notes in addition to information. Please be patient, it is being worked on and will be in a finished state before long!
Date noted: 2011-07-28

Image to the left: one of the scrolls used by the Tsoo Sorcerers to summon Ancestor Spirits.

"The monstrous Ancestor Spirits are physical manifestations of the long-dead Tsoo progenitors. They're incredibly strong and tough in combat, but they're also wily. they have the ability to become intangible at will, making them slippery opponents to pin down in a fight."

Ancestor spirits are interesting enough to make an article about the because of their very nature. The Tsoo seem to have a great respect for these beings, and can be seen bowing before them and worshiping them in the area of Talos Island.

Apparently they have to be summoned by the Tsoo Sorcerers via use of spells inscribed in scrolls (1). And the knowledge of Ancestor Spirits summoning was revealed to them by none other than Tub Ci (2). Now, nowhere is mentioned that Tub Ci had this skill when he was younger, so it is my personal theory that this skills was also part of the legacy granted to him by Pha Xiong. The complex ritual to summon them was somehow discovered by a young artist, who made a series of paintings about it (3). The paintings describe the summoning process:

This painting of a mist shrouded, alien landscape gives you the creeps

This painting of a nightmarish landscape makes you ill at ease

Not very clear, but it's the only description of the process that exists so far.

A less known fact is the effect that a concentration of such beings in an area can bring. According to MAGI a large number of them in an area can be dangerous enough to the point of tearing apart the mystical fabric of the area. (4)

As the in-game description suggests, Ancestor Spirits are fearsome fighters in hand-to-hand combat. Despite the MAGI warning, the concentration of these spirits in an area has had no in-game effects of any kind...at least until now.

An interesting fact is that Ancestor Spirit bracers, belt, mask and even knees are covered with Asian glyphs. If such glyphs are merely decorative or actually say something, I don't know. Any experts in oriental languages around? 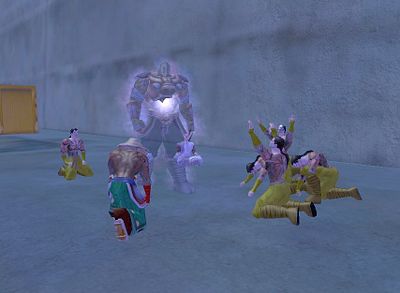 A group of Tsoo worship one of their honored Ancestor Spirits

3: City of Heroes mission: Defeat art thief and his crew

4: City of Heroes mission: Go to Talos Island and cull the number of the Tsoo

The source of most of the info for this article, and the best source available.

Like many other things, I don't think this enemy was randomly added by the devs: worshiping of ancestors is no new by any means, and has deep roots, especially in Asian cultures.