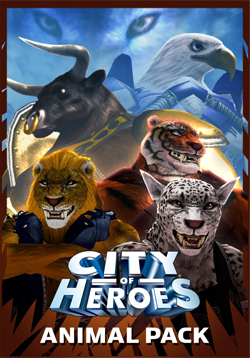 As of City of Heroes Freedom/Issue 21, this item pack is no longer available. The costume pieces, emotes, costume change emotes, auras, and movement power are now only available through the Paragon Market.

With the City of Heroes Animal Pack, you can craft a character with the grace of a giant cat, the power of a savage wolf or the fury of a falcon and a look to match! Prowl the streets of Paragon City as a ferocious cheetah, stalk your way through the Rogue Isles as a bestial wolf, soar the skies of Praetoria as an eagle or lumber your way around as a monstrous minotaur. With new customizable heads, details, patterns, legs, and tails, you can go wild with possibilities! Select from new Feline, Avian, Minotaur and Wolf costume pieces, pounce with controlled grace using the new Beast Run inherent travel power, and use new character emotes and costume change emotes to unleash your inner animal instinct.

The Animal Pack unlocks new heads, body patterns, tails and boots for monstrous legs. Some of the costumes even come with customizable manes and teeth. With these new sets, you can create a ferocious wild beast character or a noble guardian of nature.

Additionally, the Animal Fur pattern is available on some non-monstrous boot options, but not on the bare/flat style, so females with Animal Fur boots still have high heels.

The following emotes are all unlocked by the Animal Pack:

The following costume change emotes are all unlocked by the Animal Pack:

Show off your bestial nature by using this power. This power is not as fast as Super Speed, nor will it allow you to jump as well as Super Leap, however it is considerably better than the Fitness powers Swift and Hurdle.