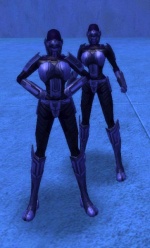 The Vanguard Adept is a NPC ally you can find during the mission Defend Portal Corporation from Serpent Drummer (CoH and CoV, levels 40 - 50). There are two of them. These soldiers have been captured by the Rikti during their assault and need to be rescued.
Once free, they will follow you and will attack any Rikti in their aggro range.

During my mission, the Vanguard Adepts had Pet class with the correspondant ammount of hit points for their level.

Rescuing them are mission objectives, and a wave of Rikti will attack each of them once you have saved them.

During the mission they will say the following:

Once free: With you here, we just might be able to win.

If refound: You had me worried for a minute there.

Vanguard is a group backed by the United Nations, and headed up by Lady Grey. Their soldiers are specifically outfitted in Impervium armor and with high tech as well as magical weaponry to fight the Rikti. Everything they do is centered around containing the Rikti menace in our world.

During my mission, he used the Vanguard Adept typical attacks: