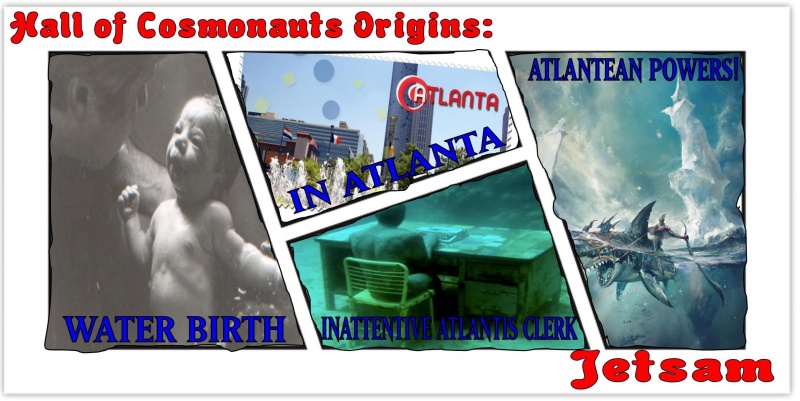 Jetsam (officially registered as Jetsam II) is a under-powered fresh-water superhero who appears in Hex Games upcoming game All Stars. Most of the information on this page is taken from that game, though the character is also played on the Justice server in City of Heroes. Created by Hooper, the character debuted in The Paradigm Nine in Space #1 (June 2010). A plumber by day, he was one of the many up-and-coming vigilantes who registered to help protect the city after the Paradigm Nine's space outing. He was a founding member of the Hall of Cosmonauts.

Along with other members of the Hall of Cosmonauts, Jetsam has appeared in the three-issue miniseries The Paradigm Nine in Space and it's spin off four-issue miniseries Art Expo Expedition. The later miniseries would also serve as the lead-in to the All Stars cross-over event All Stars Asgard, which prominently featured the group. Jetsam made his next appearance, again with members of the Hall of Cosmonauts, in the series Road Trippin' , which was followed by the miniseries Meth: A Love Story. Currently, Jetsam and the team are featured in Escape from New York.

Unconfirmed rumors contend that a future comic, The HandyCapes, will showcase the eventual final state of the team.

Jetsam was born the first of three children in the early 1980s as Whip Reginald Jones III to Whip Jr., a Coast Guard officer, and Regina, a beach lifeguard. Circumstances of his birth (See Powers and Abilities, below) resulted in Whip being born with limited Aquatic abilities.

His childhood was pleasant with a great home life and a good network of friends with few bad times. However, Whip's father died in a Coast Guard accident during Desert Storm (the accident was unrelated to the military battle, but saying it that way always made him feel better), and Regina raised Whip and his two younger siblings (Edward "Eddie" Thad Jones and Mary Rose Jones) on her own after that, with the infant Mary Rose actually being born on the same day as the accident, just seconds after Whip Jr.'s death.

During puberty a few years later, Whip began to accidentally come into awareness of his powers. First beginning to realize that by wishing the shower would stay warmer longer, it would - and then realizing he couldn't risk any "other shower activities" in the shower, as water would end up exploding all over the bathroom. During his high school years he would continue to explore and develop his abilities, learning to control them.

After High School, Whip considered joining the Coast Guard or Navy, following in the footsteps of either his father or grandfather. He also decided to visit the site of the accident, which was off the coast of the Florida Keys. It was here that he met an aging lighthouse keeper, Nick MacArthur, who in years before had gone by the hero identity of Flotsam and operated off the east coast. "Mac" would become a mentor to Whip, eventually giving Whip the idea of doing hero work on the side, and using the codename Jetsam.

Using start up funds provided by Mac, Whip opened up Flotsam Plumbing Services, Inc., using his abilities to assist him in daily work.

During this time, his younger sister Mary Rose began to exhibit powers as Whip had done at her age. However, Mary's powers also seemed to have some sort of supernatural origin, as she entered into a specter-like intangible existence whenever she used them. Mac and Whip helped Mary Rose develop her abilities, and eventually discovered that their father, Whip Jr.,'s spirit had imbued powers into Mary after his death, augmenting her already latent-aquatic ones.

Eddie, having been the only non-water-birth his mother had, had no powers, and greatly resented his sibling's powers. Unlike his older brother Whip, who he called the "lowly first-born plumber", Eddie was attending College on a full-ride and was very bright, though morally ambiguous. When he finally learned that his father's spirit had aided his sister, and seeing his brother sharing a father-son-like relationship with Mac, he felt betrayed by his family and disowned them. On his final visit from to them from College, and learning of Mac's dual identity and his brothers planned future hero identity, Mac snapped. He killed Mac in his sleep, calling him a "impostor of father" and then battled Whip throughout the family home, destroying it in the process. Whip, with Mary's assistance, quickly overcame Edward. The stress of the situation took its toll on Regina, their mother, and she passed out. Distracted by this, Edward was able to escape while Whip and Mary took care of Regina.

Regina passed away of a heart attack. Mary took over for Mac at the old Lighthouse near where her father died, strengthening the spirit within her and her powers, taking on the name Brizo. Edward graduated with a Doctorate in Engineering, keeping his college beard and taking on the name of a previous Edward: Jettison. He has vowed vengeance on Whip, and is working on designing a suit that will allow him to control water like his brother.

Whip moved his business to Paradigm City hoping to move past the tragic splintering of the family, and was in business about a year when he met the other heroes who would form the Hall of Cosmonauts.

Answering a routine plumbing call, Whip met El Taquito Loco. When the man appeared indifferent to witnessing Whip's powers, and by the Lucha Libre outfit that man had, he called a cab and followed the wrestler to his gig. At the hotel the wrestling event was held at, Jetsam met Space Monkey at the bar, and the three of them fended off Gorilla Gus as well as Alpha Dog and the Pack who attempted to rob the guests, and made an exit with the help of Hobo Harley. This led to a friendship between the gang.

Due to a major threat to earth, the world's greatest super heroes - the Paradigm Nine, left the earth to meet the challenge in space. As a result, a huge vacuum was left in the costumed vigilante world, and fears of criminal activity sky rocketed. Many would-be heroes registered during this crisis, and the gang was one of them - registering as the Hall of Cosmonauts in recognition of Space Monkey's prestigious past career, and hoping it would lend prestige to their team to help elevate them in status above the hundreds of other recently-registered teams. Instead, it has resulted in many misunderstandings and a lawsuit by a Jewish Rights group.

The team eventually found a fourth member when they met Revolution, a blind and mad scientist, during a mission to prevent an art heist. Additionally, the team has an occasional fifth member, Captain Condom, who has managed to never be around during a battle or crime-fighting outing.

Whip still keeps in touch with his sister Mary Rose (aka Brizo), who he misses dearly and constantly tries to get to visit the city. Though most think Whip is gay due to his mannerisms, he is quite straight and has an occasional fling with an aquatic-powered member of the Paradigm City Police Department Lakeisha Lowes (aka Police Siren), though she is only interested in hookups and continuously ignores him. He is aware of and supportive of other aquatic heroes The Waterboy and "Big Al" Ablationer, who alongside Whip stand strongly against the activities of Barnaby Merman Jones (Whip's Uncle), The Amazing Absorber, Psychlone, and Kraken the Third, Jr. However, Whip acknowledges the day will come when he and his brother will need to finish what they've started, and he assumes Jettison will be his eternal enemy.

After then-congressman Al Gore's demonic dealings to provide fake proof of global warming, the resulting subtle changes to the Earth by Satan resulted in the mystical powers of the Bermuda Triangle being enlarged considerably towards the Northwest, with the new Triangle now including Atlanta, Georgia. His mother's water birth of him resulted in Whip meeting one the requirements for Poseiden's Blessing, while an inattentive Clerk in Poseiden's office not noticing the difference between Atlantis and Atlanta passed the second one (being born fully submerged within the original territory of Atlanta - something typically only Atlanteans could do), and as such he acquired limited aquatic abilities. Due to the nature of his birth, the main difference between Whip and Atlanteans was that his powers are only fully functional with fresh water.

Jetsam can breathe comfortably on land and in fresh water, and can breathe for short stays uncomfortably in salt water. He has the ability to telepathically communicate with fresh-water life, though he can not order them or control them in any way. The basic fish of limited intelligence will typically do anything asked of them, however.

Whip is also able to alter the temperature of water to a certain extent, cooling or warming it. Though not able to create ice or steam, he can make "ice cold" water "room temperature" and vice versa. He is able to summon water from nearby sources, detect water by a form of psychic dowsing, and can control limited amounts of water. His half accidentally-granted Atlantean powers give him a more durable body, unaffected by depth pressure or extreme cold temperatures and increased strength. He is able to swim at very high speeds, capable of spanning 10,000 every minute if in fresh water, and can swim up some water falls. He can echo-locate small areas if in water and see in the murky darkness of the deeps. He suffers no ill effects when remaining out of water, though it is uncomfortable to him to become too dry, and he may appear "ashy" if dry for extended periods.