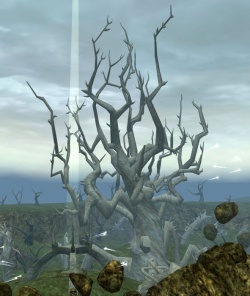 The Tree of Thorns

The Tree of Thorns Respecification Trial is a trial in City of Villains that a villain may undertake in order to earn a power respecification. During the trial, a villain must complete a few missions, ultimately with the goal of defeating the Thorn Tree, a Circle of Thorns archvillain.

In order to initiate the Tree of Thorns trial, a villain must be on a team of at least four villains and on which all players are at least level 24.

If at least one villain on the team is between levels 24 and 33, only the first respecifiction trial may be completed, with Sparcetriel as the contact, and all members above level 33 will be automatically malefactored to be level 33 during the trial.

If, due to people leaving the Trial, the team size goes below 4, the Trial does not end. It is, in fact, possible to best this trial with a team of one, provided that at least one member of the Trial team does not quit the team, but merely logs off.

There are three contacts to begin the Tree of Thorns respecification trial. They are:

The Tree of Thorns power respecification trial is composed of three missions. These missions are:

Setting Up for the Final Battle

The first two missions are rather straightforward. The first mission is rather simple, and the second, though rather long and requiring the defeat of two elite bosses, is not too difficult with a competent team. The third mission, however, requires special care in order to complete successfully. The following is a description of a general strategy that has proven very effective to complete this trial.

The first difficulty encountered is often simply getting to the mission site. The door is surrounded by numerous Circle of Thorns enemies, some of whom are as high as level 40. If one can approach the door invisible or phase shifted, that is generally prudent. Otherwise, teams typically use at least one member who can use the Recall Friend power to teleport his or her teammates to the mission entrance.

Once inside the cave, the team will encounter many Circle of Thorns enemies in dense concentrations, including many tough bosses. If a team includes a member that can be invisible and that can teleport, it is common for that team member to "stealth" the mission by going directly to the entrance of the large chamber that contains the Thorn Tree and teleporting his or her teammates to that location using the Recall Friend power. A Stalker's Hide power may be insufficient, as there are two passages along the path which contain red damaging crystal which will reveal the Stalker within large groups of Circle enemies.

Regardless of how the team arrives in the chamber, once they get there, the final battle usually breaks down into three phases:

Defeating the Circle of Thorns Enemies

In the first phase of the final battles, the team circles around the perimeter of the chamber, defeating all Circle of Thorns enemies. A team leader usually decides in which direction the team circles around the chamber and informs the team that they should only attack the Circle of Thorns enemies, not the vines or the Thorn Tree archvillain. If the vines are attacked at this point, they will regrow and it is possible to draw the attention of the Thorn Tree archvillain, which has a powerful ranged attack.

If a group of the Circle of Thorns enemies is too close to one or more Thorn Tree Vines, it is prudent to get a team member to try to draw the group away from the vines.

Once the Circle of Thorns enemies are defeated, phase two of the battle begins.

Until all Thorn Tree Vines are destroyed, the Thorn Tree archvillain is invincible. At the start of the mission, every player should have a vine counter that appears in his or her navbar. This vine counter indicates the number of vines that remain and that must be destroyed in order for attacks on the Thorn Tree to be successful.

It is important to note the Thorn Tree Vines regrow periodically. Once the second part of the battle begins, the vines should be eliminated as quickly and efficiently as possible. Any vines that regrow once the battle has begun will need to be destroyed as well before moving on to the final part of the battle. Typically, a team will continue circling the Thorn Tree in the same direction they did in order to defeat the Circle of Thorns enemies, but this time attacking the vines instead.

It may also be worth nothing that the vines are not worth any experience, so there is no purpose served in deliberately letting the vines regrow in order to gain excessive experience.

Once a team has defeated the Thorn Tree archvillain, each member will be able to choose one of the following rewards:

Also upon defeat of the Thorn Tree archvillain, a villain receive the following badges:

The following reward screen options are no longer available as of Issue 13:

This method no longer works.

One exploit that enabled teams to very easily complete this final mission due to a highly reduced number of Circle of Thorns enemies and vines around the Thorn Tree was called the "Log Out" or "Logging" or "Soft Loading" shortcut. To use it, all members had to log out of the game except for the trial leader.

Important Note: Members of the trial must not quit the team, they must log out of the game. Otherwise, those members who quit the team would be unable to rejoin the trial for completion.

Once everyone except for the trial leader was logged out, the trial leader entered the mission and proceeded to the final chamber and scouted the site. This caused the size and the level of the spawns in the final chamber to be appropriate for having only one member on the team. After a predetermined amount of time, the other members of the trial team logged back in, at which time the team completed the much easier mission.

This method of completing the trial was controversial in that it exploited the system of determining enemy spawn sizes and levels for the mission, but was usually quite effective at quickly completing the trial with very little risk for teams being defeated, even teams that would otherwise be significantly underprepared for taking on the mission at their appropriate size and level. This was regarded as an exploit by the developers and the reason for the change.