This article is about the Praetorian TV network. For the Incarnate System Trial, see TPN Campus Trial. 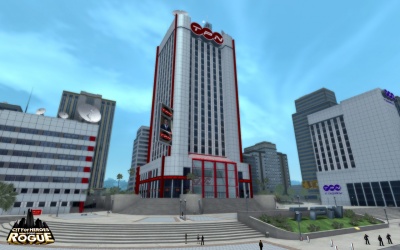 The TPN Campus is located in Imperial City, exactly on the Logos neighborhood marker.

(From the TPN: The Total Praetoria Network Plaque)

Founded by Praetor Tilman in the early days of the Empire, TPN started as a simple radio station broadcasting from a one room shack in Neutropolis, transmitting programs to inspire and entertain the people of Praetoria. In 40au Emperor Marcus Cole broke ground on what was to become the TPN Campus, equipped with high-power transmitters capable of spreading the Praetorian message across the entire world. None shall silence the righteous words of our supreme and enlightened leader: Emperor Marcus Cole.