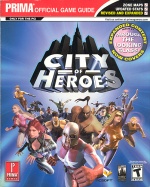 Prima Games produced several different editions of strategy guides for City of Heroes and City of Villains. The first Official Game Guide was published in 2004, and was eventually updated and expanded to include content released in Issue 1. It contained 320 pages of material on virtually facet of the game: Archetypes, rewards, gameplay, villains, and the city zones. It also included the first detailed information players could get on all of the powers.

As the game progressed, a new version of the strategy guide was developed in conjunction with the release of City of Villains and Issue 6. There was now a separate three-ring binder for Hero and Villain content, with the plan of making them easy to update as new revisions were produced. Although the visual quality of the guides was much-improved (full-color glossy paper vs. black & white), the actual content of the guides was riddled with errors and inconsistencies. A downloadable update was made available for Issue 7, but it was plagued by delays, more errors, and much negative feedback from people who weren't keen on the idea of having to print a 250-page update themselves in order to insert it into the binders. The guides were scrapped at that point as it became obvious that continuing to chase an ever-changing game with print guides was an unworkable concept.