Red Widow's soul was briefly held in this crystal 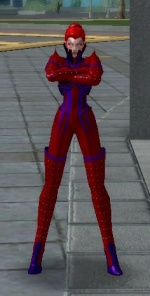 After being resurrected, Red Widow is again loyal to Arachnos.

Red Widow was an Arachnos agent loyal to Lord Recluse. Red Widow was an assassin, and carried out the murder of the original founder of Arachnos, a man known as The Weaver.

According to Ghost Widow, Red Widow "perished in an avalanche while Lord Recluse battled Statesman".

Red Widow's soul was briefly trapped in an Circle of Thorns soul crystal to be used in an experiment by Ghost Widow to see if she could return to corporal form. Arbiter Daos ordered Red Widow's soul to be freed, claiming that Recluse hadn't forgotten Red Widow's role in his rise to power.