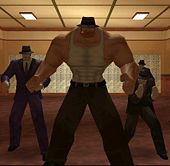 Pitbull is a Lieutenant for The Family.

Villains can find him on missions during the Story Arc Last Man Standing, from Billie Heck:

He will be present in the Kidnap Vanessa Verandi mission, where he will help you as an ally.

He will show up a second time during the Take down Family lieutenants, this time as an enemy

Pitbull is an enforcer for the Marcone Family in Port Oakes. You've agreed to help the Marcones with a few problems they've been having, and Pitbull has been sent along to assist you.

During the Kidnap Vanessa Verandi mission:

While fighting the Mooks: Take that you Verandi piece of dirt!
After you help him: About time you showed up, Villain!

During the Take down Family Lieutenants mission: