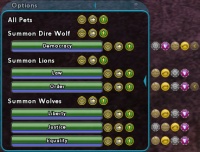 The Pets Window displays information on any summoned AI entity belonging to a character. Similar to the Team Window, any currently active pet will be displayed by name with a set of status bars representing remaining hit points and endurance. An arrow on the side of this window allows status icons for each pet to be shown or hidden.

This window is of particular importance to the mastermind archetype as it is the primary command interface between a mastermind and his or her henchmen.

Summoned henchmen are displayed in the Pets Window sorted and grouped by summoning power. Each individual henchman has a set of command icons next to its status bars that represent its current commanded state and may be left-clicked to command them individually. (If these icons are not displayed, they may be displayed by clicking "Options" and selecting "Show Individual Pet Controls.")

Each group of henchmen is labeled with the name of the power that summoned them and may all be commanded at the same time by clicking on the command icons to the right of the summoning power's name.

Finally, commands may be issued to all summoned henchmen by clicking on the command icons to the right of "All Pets" at the top of the window.

There are two possible modes of commanding mastermind henchmen:

Simple mode is activated by clicking "Options" on the outer border of the Pets Window and selecting "Switch to Simple Mode."

In simple mode, three icons appear next to each henchman's status bars.

Follow: Henchmen will follow their master wherever he or she goes. If any hostile targets come into range, henchmen will attack them on sight.

Heel: Henchmen will follow their master wherever he or she goes, ignoring all targets even if their master or another henchman is attacked.

Advanced mode is activated by clicking "Options" on the outer border of the Pets Window and selecting "Switch to Advanced Mode."

In advanced mode, two icons appear next to each henchman's status bars. The icon on the left in each set represents the henchman's current stance:

Passive: A henchman will not change his currently assigned task even if its master or any other henchmen are attacked.

Defensive: A henchman will defend its master or any other henchman that comes under attack.

Aggressive: A henchman will attack any nearby enemies.

Next to the stance command, an icon representing a henchman's current action is displayed:

Attack My Target: This will send henchmen to attack the enemy its master currently has targeted, regardless of the henchman's currently selected stance. Even if the mastermind switches targets, the henchmen will continue to attack the same target until either the target is defeated or another command is issued. After defeating a target, the henchmen's current action will default to follow. If this command is issued without a hostile target selected, henchmen will simply default to follow.

Go To: Selecting this command will change the mouse cursor to the circular targeting reticle. Clicking the reticle on a valid location will send the henchmen to stand at the location indicated. Henchmen may move short distances from their assigned position to attack if their stance is set to aggressive or defensive, but will return to their designated location when combat ends.

Follow Me: Henchman will their master wherever he or she goes.

Stay: Henchman will stop at their current location and remain there. They may move short distances to attack if their stance is set to either aggressive or defensive, but will return to the same spot after combat ends.

Dismiss: Henchman will be removed from play. Dismissed henchmen will have to be summoned again prior to use.

In addition to these commands, the following advisory icon may appear.

Conflict: This is displayed in the Pets Window when any two henchman within a larger group are issued different commands from one another. This indication is simply informational and does not indicate an error.

The Search Window window can be opened by:

The Pets Window does not provide access to any other windows.

For more information on commanding Mastermind henchmen, refer to the following articles: