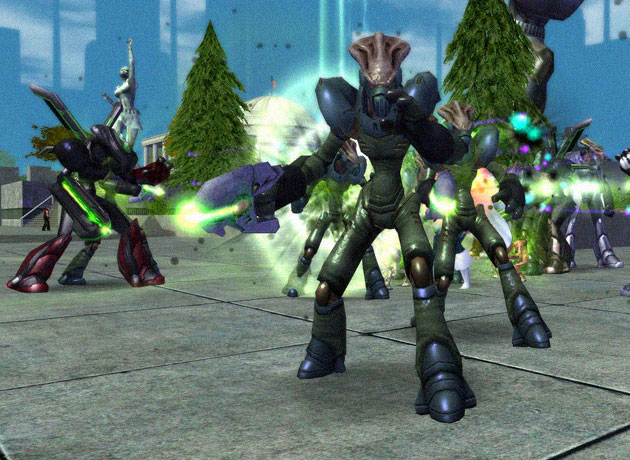 Early reports indicate that the attack was a well-coordinated assault on numerous key urban centers around the globe. Witnesses in Paragon City claimed that the skies darkened with heavy, grey thunderheads moments before the first wave of alien invaders tore across the sky.

The brutal and unprovoked attack caused incalculable damage in the first few minutes. The city’s protective War Walls collapsed, and vital points of the city’s infrastructure were devastated by tactical nuclear strikes. Paragon’s heroic defenders were overwhelmed by the initial assault, and the local MedCom network was jammed to capacity.

Vanguard coordinated with local and federal authorities to broadcast the following information. “This city is under immediate threat from Rikti attack. Civilians should seek cover and avoid the streets at all costs! Civilians are advised to shelter-in-place, remaining inside your home or office and protect yourself there. If you are wounded, please seek aid at your nearest hospital or medical facility.”

The Vanguard broadcast also highlighted the key dangers the city is facing. “Rikti destroyers are patrolling the city – they will attack any large group on site. If a destroyer passes overhead, seek refuge in a nearby store or beneath an overpass. Citizens should also be aware of unexploded ordinance left in the wake of passing Rikti ships.

These unexploded bombs – or UXBs – should be avoided at all costs. They are extremely dangerous and may detonate at any moment. Please let local heroes deal with these explosive devices.”

The waves of attackers are not limited to Paragon City. Reports have come in from around the world – including Austin, San Jose, Orange County, Santa Monica, Brighton, Tokyo, Osaka, Beijing, Shang-Hai, Bangkok, Taipai, and Seoul - describing similar invasion forces. In Europe, the defense effort is being coordinated by MaXmillion, Frosty Robot, Straight Edge, and Double Shade.

The Paragon Times Rogue Isles desk has also observed attacks in Mercy Island, Port Oakes, Sharkhead Isle, and the Nerva Archipelago among others. Rikti ground troops have even been seen in the twisted streets of the capital, Grandville, battling Lord Recluse’s Arachnos soldiers beneath the towering skyscrapers.

War correspondent Aine Sekhmet covered an attack on the Golden Giza in St. Martial thwarted by the brutal teamwork of Night Smoke, Farmer Frost, the Mod Scientist, and Arachnos Elite.

Back in Paragon City, the Overbrook Dam has been repeatedly assaulted. A core group of heroes consisting of Black Hammer, Little John, Fire n’Ice and Storm Bird barely held the line. They were almost overrun until back-up arrive in the form of Bayani, Angry Angel, and The Storm who helped push back the invaders, but they don’t know how long they can hold out.

Fighting has been fiercest in the Rikti War Zone, where Vanguard members have formed the strongest line of defense. Zombie Man, TerraDraconis, Taos, and Thorny Thistle came together under direction from Vanguard’s leader, Lady Grey to hold the center of the Vanguard Base. In another part of the zone, Castle led an attack on a Rikti destroyer with Soul Train, Tundara, Skarmory, and Lady Z, but they were overwhelmed by a group of Rikti priests.

Positron urged all heroes to come together in this dark hour. “Heroes of Paragon,” he announced, “the world’s need has never been greater. I implore you to join us in our resistance to this barbaric invasion. Help us and each other drive back these merciless Rikti from our cities and shores. Together we have a chance to see a new dawn over Paragon.”