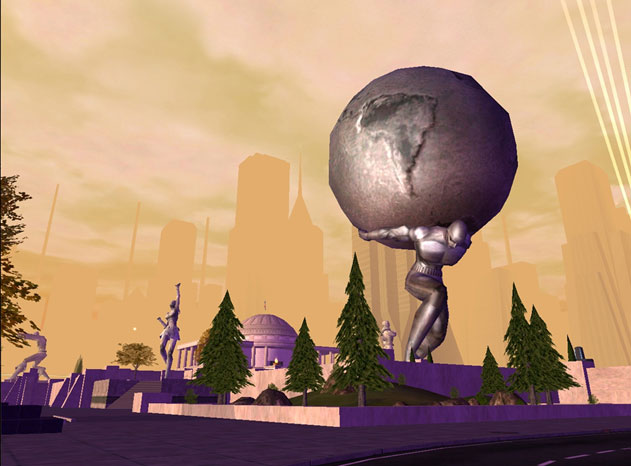 Paragon City, the Birthplace of Tomorrow

Paragon City, the Birthplace of Tomorrow, has recently celebrated its third anniversary of the end of the Rikti Invasion. From the dark hours of literally fighting the Rikti on the steps of the Chiron Medical Centre in Atlas Park, the heroes and citizens of Paragon City have come far and overcome great challenges in the past three years.

Following the end of the Rikti Invasion, further hazards arose to strike at the heart of this great city. Were it not for the continuing vigilance of the costume-clad men and women, the city might not have recovered. These are truly heroes, and the term is not given lightly, for these men and women (and sometimes genderless entities) are exposed to extreme danger on a near daily basis. Never has the work of the few been so necessary to protect the lives of the many.

No better example of this “for the greater good” attitude exists than their behavior during the Rikti Invasion. Thousands of heroes died protecting the world’s citizens from enemy forces. The final act of the war, which saw Hero 1 lead Omega Team in what can only be called a suicide mission to the Rikti homeworld, is probably the greatest example of this nature of heroic sacrifice.

Although the Rikti left the greatest scars on the city, other hostile forces have threatened Paragon in recent years. Gangs have taken over public parks, and brazenly commit crimes in the open. Giant-monsters rampage in once safe and pleasant neighborhoods.

Extra-dimensional invaders known as the Praetorians attempted to establish bases on our Earth. Gods and monsters have appeared on the fringes of our reality, ready to conquer everything they survey. Even the act of rebuilding Paragon City has unearthed new threats, as saboteurs and thieves from the Rogue Isles have been discovered on local shores.

But for every threat that Paragon City has faced, men and women (and miscellaneous) of all ages, shapes, sizes and abilities, have stepped forward to maintain order in the face of pure, reckless anarchy.

Looking to the future, it appears that the city will need her heroes more than ever. Arachnos continues to mount its terrorist campaign against Paragon City, despite the denials of Lord Recluse. Several scientific journals have reported activity on the surface of the moon, yet government officials refuse to comment. And no doubt this is just the tip of the iceberg in terms of the events that will threaten Paragon City in the coming days.

Fortunately for those living within Paragon City, the heroes will be there to hold the line. Heroes and heroism has always been a big part of the fabric of this city. It is not the costume that makes the hero, nor one’s special abilities– it is the willpower to stand up and be counted upon when others are threatened. There are hundreds of individuals within the city that have this will, which is what makes Paragon a City of Heroes.